Batgirl issue #36, the second issue since the much-talked-about creative reboot on the title, comes out tomorrow, and we’re pretty stoked about it. We had the chance to sit down with the creative team behind the comic at New York Comic Con, and talk about the reception to their first issue, their new approach to Babs, and where she’s going next.

Though the initial response was daunting, co-writer Cameron Stewart has been incredibly pleased with the comic’s reception. “It’s been incredible,” said Stewart. “When it was announced back in July, there was obviously a huge reaction, and there was a lot of hype, and a lot of hope, and a lot of expectation.” But now that the book has actually been released, “people seem to be responding to it just as positively as they did to the costume reveal,” Stewart said happily.

“I’ve been reading reviews for it saying that it reached [people’s] expectations and then some!” added artist Babs Tarr. “That’s better than we could have expected.”

But, of course, very few things in the world receive entirely positive reviews, and the new Batgirl run is no different. “There are some people who it doesn’t register with, it doesn’t play for, and that’s to be expected,” said co-writer Brenden Fletcher. “Whether they’re fans of the last run and the tonal shift is too difficult, or they feel that there are too many artifacts of modern social culture, modern digital culture.”

“In order to make a mark, we had to start with a pretty bold thing, so we did hit it pretty hard with the change in culture and environment,” agreed Stewart, “and it isn’t going to play for some people. But,” he added, “what has been really gratifying is a lot of the negative reviews that we’ve seen will acknowledge that it’s just not for them. They’ll go, ‘This isn’t necessarily a bad comic, I just don’t think it’s for me anymore.'”

“I think a lot of that can be worked out in time,” said Fletcher. “I think it’s just getting used to something new and something different.”

“And that’s fine because that’s kind of intentional,” agreed Stewart. “We’re trying to go for a market that’s been traditionally underserved.” 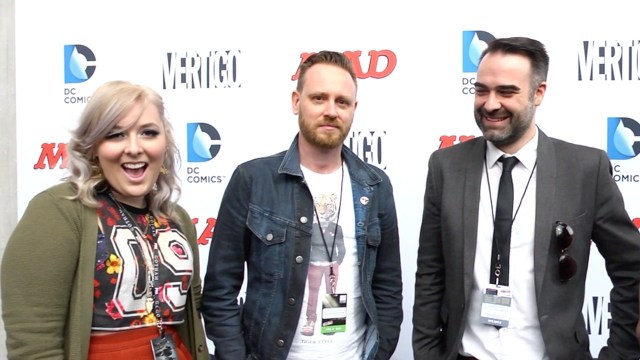 In this run of the comic, Babs is your typical twenty-something girl living outside of a big city – with the added pressure of also being a kick-ass crime fighter. It was particularly important to this creative team to make her life feel as current and realistic as possible, while still maintaining the aspects of superhero culture we all know and love.

“I feel like we’re just trying to write honestly about who these people are in this day and age in this place,” said Fletcher. “And it just so happens that that’s how it is, that’s how it feels, that’s how people live.” But because of the comic’s realism, there’s been some debate about Babs’s character and her choices – something, said the team, you might not have found in the cultural zeitgeist if Babs had been a male character, like Nightwing.

“Those first two pages [of issue 35] has brought up so much conversation about what is expected of women, and acting perfect,” said Tarr, referring to a night Babs spends partying and kissing a dude. “And mostly girls are like, ‘She’s fine! She’s her own person! She can do whatever she wants!’ and guys are like ‘A superhero girl shouldn’t be degrading herself like that!’ And it’s like, that’s your own deal you’re pushing on her.”

“I think we didn’t want to stick to those ideas that a female character has to be prim and proper and never do anything wrong,” Stewart said. “Or is just a plastic notion of what a special person could be,” agreed Fletcher.

Stewart went on to add that any good character, regardless of gender, has agency, and the ability to do what they want. “In that scene, she’s drinking and making out with a guy because she wants to do it. In that moment, that’s what she feels like she wants to do. And she shouldn’t be judged by that by the readership or by the other characters. And we made a conscious effort at the end to not have any of the other characters judge her for that behaviour.”

“And that she doesn’t judge any of the other characters for their behavior!” interjected Fletcher. “They’re all cool with it – we wish everyone else was too.”

Fletcher also added that everything Babs does is for a narrative reason – it’s a part of her character’s journey, and her struggle to find herself and her direction. Stewart mentioned that they specifically wanted to show that, though “she’s obviously super competent as a crime fighter, because she’s spent a significant part of her young adult life doing this, maybe she’s not so experienced in the social scene yet. So when she’s put in a position where she’s at a party, yeah, maybe she’s not going to act responsibly.” It’s all a part of Babs’s journey to find who she is – which is how both characters and real people experience personal growth.

The team also felt it was incredibly important to include a series villain who wasn’t just your typical masked robber. The IRL-feeling Babs needed an antagonist who is just as realistic and current as she is. By having their main baddie be a 4chan-style hacker, they’ve truly tapped into a current cultural fear that many women face constantly.

“We wrote this before the events of the last few weeks where this idea of privacy and personal information being leaked to the masses has suddenly become extremely relevant,” explained Stewart. “His crime[s] are something that can affect you, can affect any of us, and is something that’s very immediate and relevant.”

After I mentioned that I have known plenty of women who have been doxxed (or worse) online, Stewart said “sadly a lot of us know people that that’s happened to,” and because of that, the villain felt appropriate for Babs’s story. “It grew organically out of the issues we were already dealing with in Barbara’s situation,” agreed Fletcher, “so it was easy to pull a villain like that out of what she was already coping with.”

The team have noticed that women in particular are responding to their villain. “I think female readers are responding to that because it’s more of a thing that affects them,” said Stewart. “Men don’t have the same kind of fear.” Tarr added that women experience a real sense of shame when confronted with the idea of being exposed against their will on the Internet.

“I’ve seen some of the commentary from some of the male readers who think this villain is lame and not as much of a threat,” said Stewart, “but that’s not really true. It’s not a threat to you, but it’s a huge threat to a lot of women.”

Fletcher added that people might have to adjust their expectations when it comes to what being a “supervillain” means these days. “Times are changing, we have different types of representations of these characters in all sorts of media, and we’re just trying to do something modern that feels right for the times, and relevant and important with this superhero. We’ve got a chance to make change and a big difference.”

Stewart, Fletcher, and Tarr all hope you keep reading on, because each issue is going to bring something fresh and different to the table. “You can see it identified on the second cover – the action scene with the bikes – and the third cover, with Batgirl in her sparkly Beyonce outfit,” finished Fletcher. “Every issue is going to be a surprise.”

And we here at TMS can’t wait to see what comes next.