As everyone on the planet prepares for Apple to announce the iPhone 5 at their mysterious press event on September 12th, rumors about the new phone have reached critical mass. A new iPhone sounds great and all, but now it seems that Apple may plan on doing something else that will totally overshadow any and all of the next-gen phone’s rumored new features… Apple may be redesigning their earbuds. BUM BUM, BUM.

Vietnamese tech site Tinhte.vn got their hands on what they claim are Apple’s next-gen earbuds, which we assume will come packaged with the iPhone 5, , and Apple’s other future mobile products. According to the site, the earbuds are being manufactured at a FOXCONN plant in Vietnam, which may or may not explain how they got hold of them so fast.

Tinhte initially released a video showing off the new earbuds and providing commentary, which has since been marked as private on YouTube and is no longer viewable. However, MacRumors took the time to jot down a translated transcript of the video, which described the earbuds:

The new ones are much smaller; when they are worn, they do not hurt the way earbuds do. You can see on the old ones the surface is a separate part that looks like it can be detached – not like the small surface of the new one.

Apple’s earbuds are one the few products that haven’t changed many, many times in their lifespan. The design hasn’t changed in a significant way since Apple added the remote to the cord in 2008. The physical earbud, the thing that actually goes into your head, hasn’t been redesigned since 2006. If you believe even a little bit of what people have been saying in the last few months, Apple seems to be making a lot of big changes with the iPhone 5. You’d think a bigger screen and a new iPhone/iPad charger port would be enough change for one model. It looks like Apple really wants to keep people from getting bored of their design.

While it’s perfectly reasonable to remain skeptical of news this big coming from a single, international source, Tinhte does have strong track record of showing authentic Apple products ahead of their release, according to MacRumors. 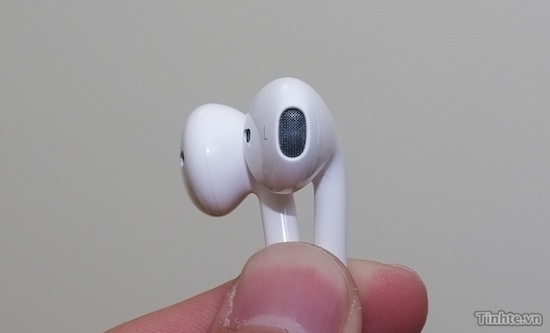 (Editor’s Note: Since Apple doesn’t actually package earbuds with the current iPad, they probably won’t pair them with the iPad Mini, when and if Apple decides to release it. Thanks, Mrknowitall!)