Ask the Mary Sues: Will We Ever Get Enough Bernie Memes?

The inauguration is over, but the memes are forever. 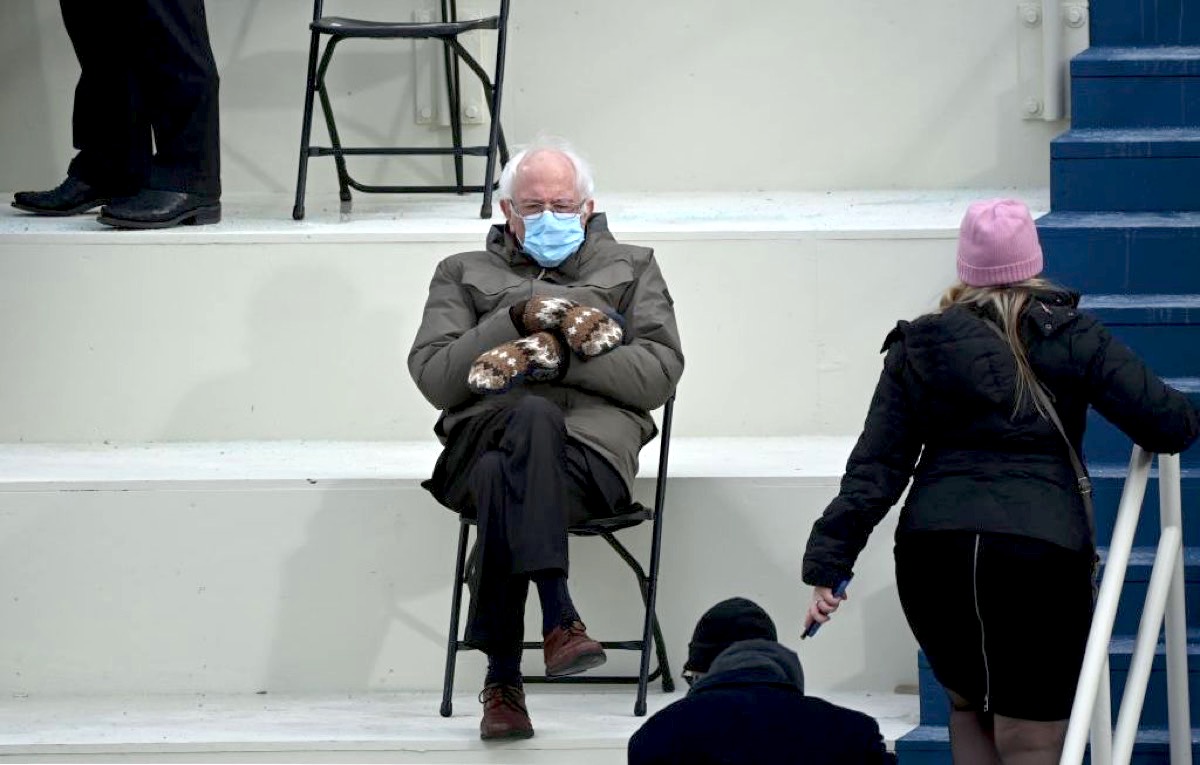 On Wednesday, Joe Biden and Kamala Harris were sworn in as the new president and vice president, respectively. But the day undoubtedly belonged to Vermont Senator/Jewish grandfather Bernie Sanders, who made meme magic with his appearance at the inauguration. Dressed in mittens and his already meme-famous coat, Sanders sat on a folding chair, legs and arms crossed, in a look that can only be described as Vermont dadcore. And what was with that manila envelope? Was he headed to the Post Office afterwards?

People across the country couldn’t resist the urge to Photoshop America’s beloved socialist curmudgeon into a variety of films, paintings, and landscapes. It was the kind of good old fashioned meme fun we haven’t seen since that time Queen Elizabeth wore a green suit.

And as the day waned, the Bernie memes were unstoppable. After hours of texting one another our favorites, we decided to collect them in this column. Look, it’s been a tough couple of weeks. Just let us have this.

Briana Lawrence: As someone who has spent years at an artist alley table, this meme has somehow captured how I feel from Friday to Sunday (or Thursday to Sunday, depending on the show) when I’m working an event. The coat and mittens might feel a bit extra, but trust me, over the summer the A/C is on HIGH BLAST so it was never a surprise to see an artist huddled under a blanket (especially in the hotter states).

Working the table is hard work, forever a balance between “I want to be so busy that I can’t move but also it’s been hours and I have to pee” and “Please make a decision on what you want to purchase I’ve only had a mint from the hotel for breakfast and I need to eat this sandwich my friend brought me that’s been sitting here for the last 20 minutes” and “oh so you’re just gonna stand there and block my table and set all your stuff over my display huh?”

Bernie’s working so hard please buy something from his booth ok?

Support your favorite artists during this pandemic, shop their online stores, and support free healthcare! pic.twitter.com/05m7TVZsb4

Dan Van Winkle: Now this is a story all about how democracy got flipped, turned upside down:

Okay, I’m going to bed now Fresh Prince of #BernieSanders My My My what 3 Wednesdays in January will do! #Inauguration pic.twitter.com/l6TCBdTsjf

Kaila Hale-Stern: Where does Mittens Bernie belong? The answer, as provided by the Internet, is everywhere. Whether it’s on the moon, starring in a famous meme, sitting in the sidelines on a movie, or taking a turn in Chicago, there’s no property or famous image that isn’t vastly improved and made instantly hilarious by Bernie’s presence.

i am once again asking if he had it comin’ pic.twitter.com/DSKEuWJmGQ

Rachel Leishman: My entire brain is just The Mandalorian on repeat. I can’t stop thinking about it, and now that there’s a new Bernie meme that puts Sanders in the cockpit of the Razor Crest? Okay, I’m in. Ready for Bernie to be cold in space with Din Djarin and Grogu for an entire season.

Lyra Hale: Bernie looks like my tio who is so done with the party that is happening around him. Sure, he’s happy for those celebrating and that he now has this warm poncho, but he has errands to run and a couch to sit on. Also, he’s done sitting with the other tias. All they talk about is bochinche and he hears that all the time at home. Vamonos Jane!

Chelsea Steiner: As someone hopelessly devoted to Mean Girls and America’s Next Top Model, these two memes spoke directly to me. Although let’s be real, Bernie would be sitting with the sexually active band geeks, am I right? Or maybe he’s chatting up Yaddle on Coruscant. The possibilities are ENDLESS.

3 beautiful models stand before me but I only have one photo in my hands pic.twitter.com/AVl4BZSFEp

Bernie on the Jedi Council? I cannot with y’all. pic.twitter.com/2fe4aEhJEe

Oh, and these works of art are *chef’s kiss*:

Vivian Kane: Few things illustrate the lightning speed and nonexistent attention span of the internet better than how this Bernie meme started at an in-person event, flashed through Twitter, and returned to an IRL space in the span of just a few hours, thanks to artist Mike Bennett. This truly is a postmodern delight.

Bernie Sanders today is a whole mood and I’m here for it. pic.twitter.com/l1xeiPl6Jd

I wanted to join in on all the fun pic.twitter.com/fIk9cvN7pv

Jessica Mason: I love this one because, well, I love Comic-Con and I miss it terribly. Though to be fully accurate Bernie would need a tent, several friends in suspect cosplay rotating in and out with one badge among them, and a small portable grill.

I also love how perfectly this fits with the four of cups and it’s meaning of refusing an offer when they’re all around.

I apologize for nothing pic.twitter.com/Cg6yTCsrs3

The Book of Bernie. https://t.co/ZGOTW3kkY0

Is this too far? pic.twitter.com/YNZ0tKVuma

Even Sanders himself weighed in on the trend:

Meanwhile on Capitol Hill, @BernieSanders had this to say of the viral photo of him bundled up on Inauguration Day: It “makes people aware that we make good mittens in Vermont.” He added, “We have some good coats as well.”

Okay, just one more for the Bernie pile. Bernie in Lord of the Rings. pic.twitter.com/tUldFiZkTn

What was your favorite Bernie meme? Let us know in the comments!