Terrifying Driverless Cars Have Preceded Flying Cars, and I Am Not Happy About It 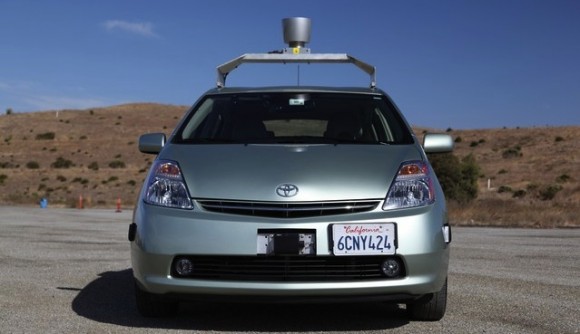 *The author is a car driving human from Long island.

Originally meant to be just a fun testing prototype toy for use in the Google parking lot at their headquarters in Mountain View, California, the driverless Prius will be taking a field trip to the Silver State — which was likely the only state Google could talk into giving a car a drivers license. Engineers have been conducting a lot of testing in Nevada lately, and it’s just “close-far” enough away to try out in the “wilds” beyond Google HQ.

So, how exactly does this thing work? Is it a glorified, full-scale remote control car? Or something way more sinister and science fiction-like?

The software within the car uses all sorts of tools, ranging from a set of short-range radar sensors and video cameras to a persistent Internet connection that constantly scans Google Maps for road and traffic updates.

Oh, yes! The very same Google maps that we use to figure out directions will be used to navigate a car in real time that takes us down a non-existent road once in a while. Gosh, I do hope Google keeps their maps updated every second of the day so a driverless car doesn’t fling itself off of a cliff it didn’t know was there. (Or did.)

The car itself has never been driven without passengers, though the single accident it suffered occurred when one of those passengers attempted the manual override and tried to re-take control of the car.

HOLY CRAP YOU GUYS THIS IS TERRIFYING.

The idea of a car that relieves humans of having to take responsibility for the motor vehicle they’re trying to operate while they have better things to do (like talk, text, and play video games on their Google-operated Android smartphones) while getting from Point A to Point B makes sense. Because humans are a very distracted race these days, and the internet requires their undivided attention. (Also: Get off my lawn!) But how freaking disappointing that this beat the flying car. If people knew they could fly their cars, that would be so much more awesome, they wouldn’t feel compelled to be on their phones while driving — ahem, flying — and that particular kind of accident would happen that much less.

At least in my dream world of flying cars, which doesn’t exist in real life, because the smartypants people at Google are too busy building a driverless car. Those jerks.

Eh, I’m sure the driverless car will find its place in this world. And that place? Is Jared.

Good luck with the future!