Netflix to Raise Prices, Push for New Packages, End Times Truly Upon Us

Gird your loins for this veritable kick in the pants: Netflix is going to raise streaming prices. Sure, you could argue that the service is clearly worth it and would need to inflate its price by several orders of magnitude to be as absurd as standard cable TV, but why would you try to interrupt our blind, binge watch-addled panic?

Before you retreat into a dark corner, huddled over your phone with Orange Is the New Black and Daredevil episodes on an endless loop, muttering “my precious” over and over again and believing this can’t possibly be true, know that it comes straight from Netflix CEO Reed Hastings. Also know that Hastings dressed like this for a webcast about the company’s earnings: 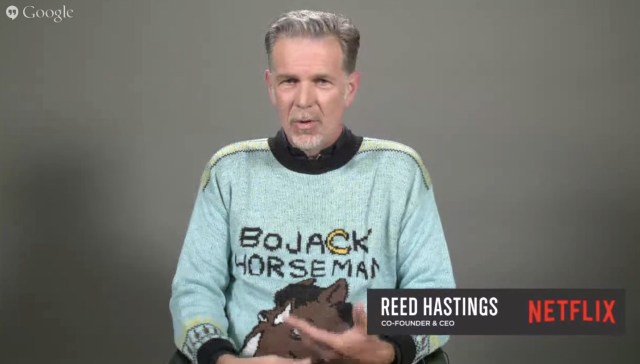 This quarter’s earnings: hundreds of millions plus untold amounts of respect.

In it, Hastings said that Netflix will be pushing consumers towards higher tiered plans in the future with the bigger plans allowing more people to stream at once—which would necessitate cracking down on people who share passwords. This isn’t going into effect immediately, so take this time to think of a gentle way to break the bad news to your cousin/friend/really good acquaintance that they’ll have to get their own subscription.

Hastings also indicated that while the timeline for such changes is still long, all prices will probably rise eventually as the company adds more content to the service. He said, “We want to take it very slow. Over the next decade I think we’ll be able to add more content and have more value and then price that appropriately.” So don’t panic just yet.

But it’s not all bad news! He also mentioned ongoing wars with Internet providers over charging Netflix for its high traffic volume and how price negotiations on that front hurt the company and could even cause blackouts like some cable channels have experienced during negotiations. While that’s terrible, Netflix’s commitment to fighting against it—for their own self interest or not—is good for the Internet as a whole. The Guardian reports that Netflix is much happier with Charter, the company now trying to buy Time Warner Cable after Comcast was stopped by the FCC, for promising not to charge for traffic.

end of the worldNetflixStreaming Television