What’s the Most Offensive/Insulting Thing Netflix Has Suggested to You? 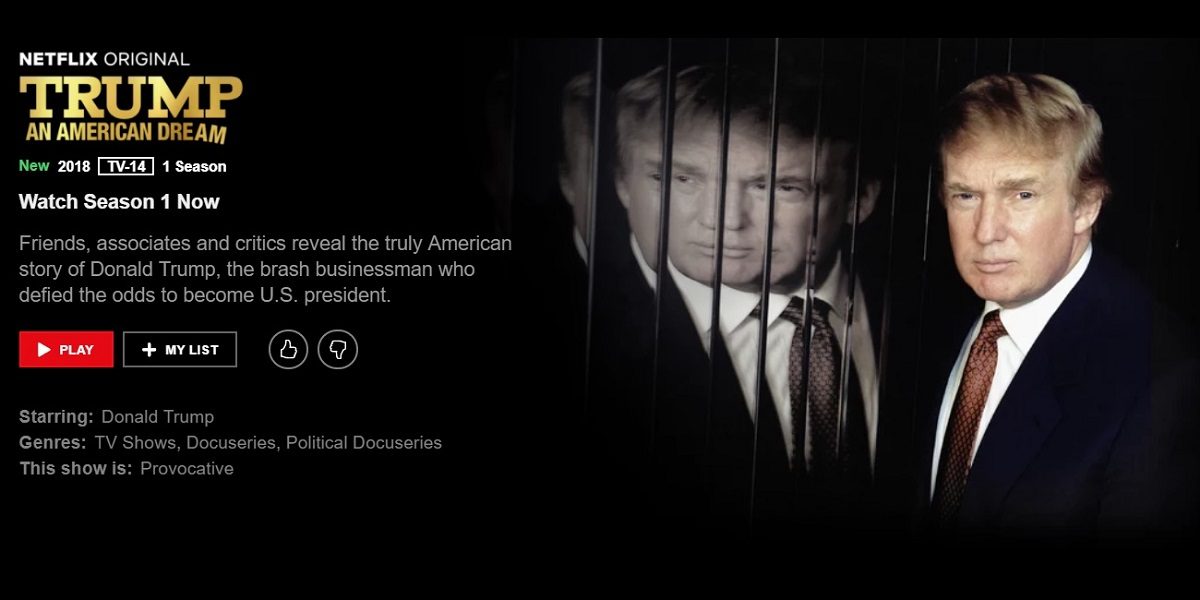 A number of progressives on Twitter were pissed to find that Netflix’s algorithm thought they might enjoy the docuseries Trump: An American Dream, in which “Friends, associates, and critics reveal the truly American story of Donald Trump, the brash businessman who defied the odds to become U.S. president.”

Now, I have not seen this docuseries, which might actually be great and critical of Trump, but that summary sounds like the opposite of everything true and decent in this world.

how very dare you @netflix pic.twitter.com/vvqqyI6GnB

LMAO ohhhh @netflix, how poorly your algorithm works if you truly thought I’d like to watch “Trump: An American Dream.” pic.twitter.com/jfuXlbadBD

Dear Netflix,
You don’t know me at all. I can tell by the recommended trailer, “Trump: An American Dream.” I’ll pass#thanksbutnothanks

The Netflix algorithm has certainly had its flubs before, such as labeling The Babadook as an LGBTQ movie and giving birth to an internet icon. However, this is a different sort of error, the kind that suggests a fundamental misunderstanding of the user.

So it got me thinking: what’s the most offensive/insulting thing that Netflix has ever suggested to you, Mary Suevians?

For our own Princess Weekes, it was “every Adam Sandler film made after 2003. How double dog dare you?” For our own Vivian Kane, it was “that fucker Piers Morgan’s true crime shows. Like yes, obviously I want to watch a show called Killer Women—and then I see his face on the thumbnail and feel disgusted.” For me, it was probably Bright: not because it was necessarily the worst thing that Netflix ever suggested to me, but because it was so aggressive about the suggestion. Like, they really, really thought I wanted to see this movie.

NETFLIX IS FUCKING DRAGGING ME FOR WATCHING VOLTRON but its what i deserve pic.twitter.com/naVR8cl2N2

netflix why u gotta keep calling me out like this pic.twitter.com/ogRzgQapQX

When the streaming service tips its hand and shows that it almost knows you too well, revealing all your trashiest tastes in film and TV, you can also want to say: “Excuse me! How dare you?”

So let’s rag on our computer overlords. How has the mighty Netflix algorithm insulted you lately?