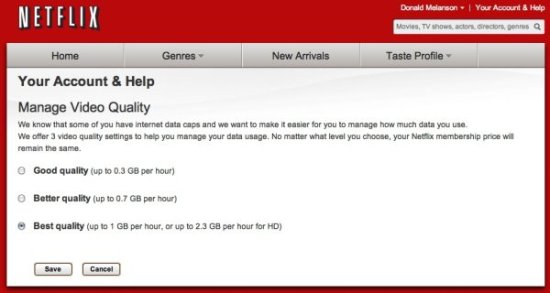 In order to sidestep Canada’s pervasive bandwidth caps, Netflix Canada has unveiled a new tiered service that will allow users to customize their video quality. The move comes in response to progressively lower bandwidth caps placed on consumers by ISPs, who claim that streaming services like Netflix are clogging the tubes, so to speak.

The new options offer three settings with different data rates: Good, at 0.3 gb per hour; Better, at 0.7 gb per hour; and Best, at 1gb per hour or high with HD. Since the Best setting is the only one which mentions HD, it can be assumed that HD content is only available on the Best setting. With the new settings, users who previously watched 30 hours of Netflix and rammed nearly 30gb through the intertubenet can lower their usage to a mere 9gb.

There is no indication that Netflix will be offering a lower monthly fee for users who turn down their video quality. It does, however, prevent them from maxing out the limits placed on them by their ISPs and getting slapped with hefty fines. It’s unfortunate that ISPs continue to find new ways to charge their customers and restrict access to the services they already provided, instead of fixing these alleged maladies.