Asus and Acer No Longer Making Netbooks | The Mary Sue 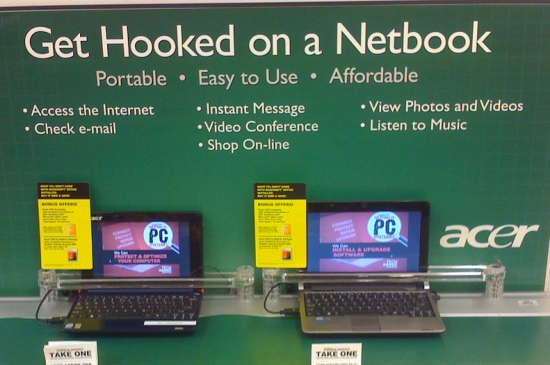 Netbooks, once championed as the savior of the PC, will soon be a thing of the past. Both Acer and Asus, the last companies left standing in the netbook arena, have stopped making the portable, borderline adorable computers. The companies have said they won’t produce new netbooks as of yesterday, but they do have some remaining inventory. If you’ve always dreamt of owning an undersized, underpowered laptop, you better act fast.

The first time I saw a netbook was in 2007 on display in a toy store. I thought, “That’s cute. A toy computer for children,” but when I checked the specs I realized it was very nearly a real computer. I was looking to replace an outdated iBook, but despite being a few years past its prime, the iBook still had better specs than the first generation Asus Eee PC, generally considered the first netbook.

Power was never the focus of the netbook. As people’s computing lives moved more and more online, the actual power of their computer became less important, and in a time when the economy was in a recession, the affordability of netbooks became their biggest asset.

That lasted for a few years, but as smartphones and tablets got more powerful and more affordable the need for an ultra-portable laptop dwindled. Netbooks didn’t need to be highly powerful because they were largely used, as the name implies, to do things online. Once phones became better at performing tasks like checking email and searching the Internet, carrying around a separate device that did those same things became unnecessary.

The improving economy also means that people can afford better hardware, and PC producers are meeting that demand with middle-of-the-road computers that outperform netbooks without breaking the bank. As portable devices continue to improve, and phones and tablets smash together into things like the Galaxy Note “phablet,” maybe full-sized notebook computers could meet a similar fate in the not-too-distant future.

(via The Guardian, image via Wesley Fryer)