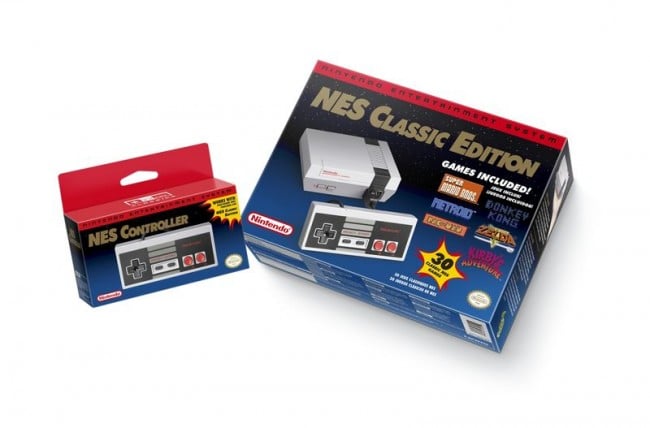 The original collection of Pokémon in Pokémon GO aren’t the only retro Nintendo comeback this year. This morning, Nintendo surprised everyone with the announcement that the original NES, the console that made Nintendo a household name, is coming back to stores with HDMI support and a bunch of built-in, classic games.

The “NES Classic Edition” is a lot smaller than the original, and you’ll notice that its controller ports are slightly different (if you are a giant nerd like me). If the connector still looks a bit familiar, that’s because it’s the same as the one on the bottom of your Wii remote, meaning you’ll be able to use the NES Classic’s custom NES gamepad to play Virtual Console games on Wii and Wii U, as well.

The NES Classic sports 30 built-in games and a controller at a price of $59.99, with extra controllers selling at $9.99 for two-player action. So far, there’s no mention of whether or not there’s any way to expand the mini console’s library of games [UPDATE: The console will only ever play the 30 games already listed], but for players tired of how bad their original NES looks on an HD TV—and who are unwilling to plunk down several hundred dollars for an updated, HD-ready NES—it’s a decent solution for HD retro gaming, provided it puts out increased resolution to go along with its connection method. Retro consoles like this have been on the market for a while, but an official, HDMI-compatible version from Nintendo, full of NES classics, is a tempting offer.

Here’s the fairly comprehensive list of games you’ll get with it when it launches on November 11, 2016: