The Replies to Nerdist’s Statement About Chris Hardwick Are Awful 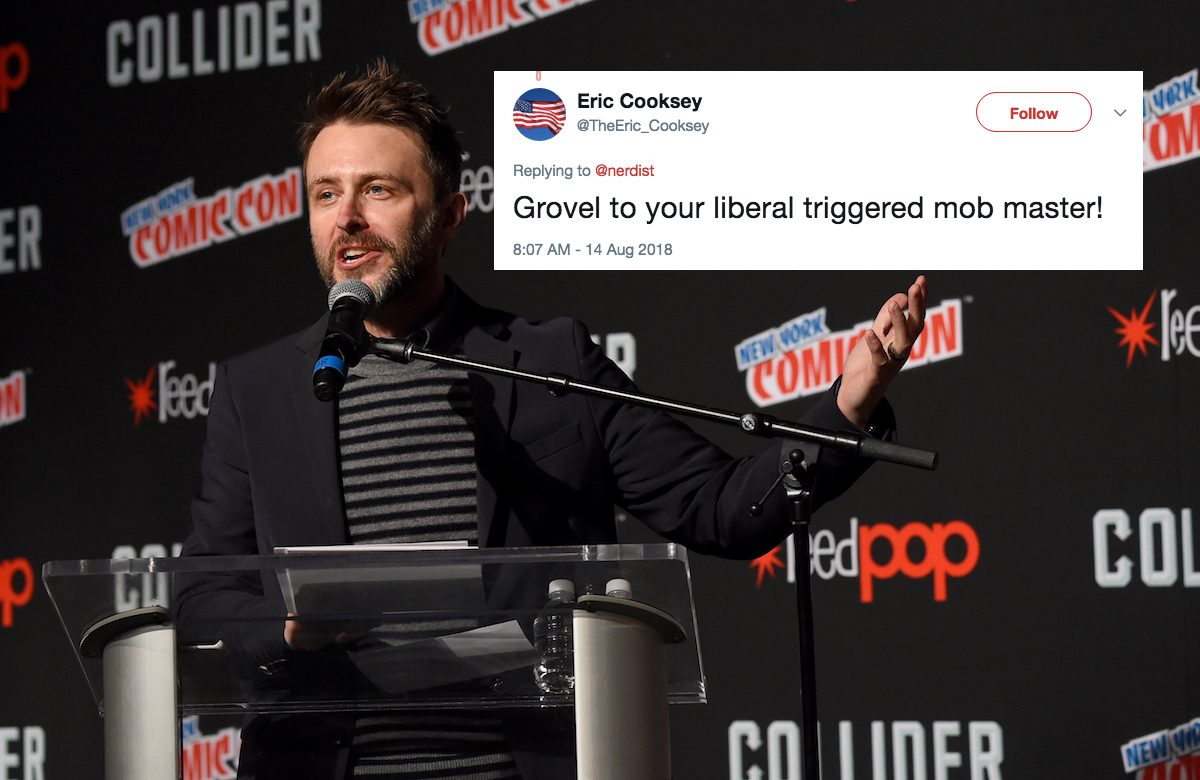 Nerdist released a statement after they reinstated Chris Hardwick’s name as founder on their site, and the replies on Twitter are … troubling, to say the least.

The statement that Nerdist put out on Twitter is thoughtfully done. From the carefully chosen language, it appears likely that they put Hardwick’s name back in place because they were legally obligated to do so, and the choice was not the current Nerdist team’s doing. Hardwick’s name had been removed from Nerdist following Chloe Dykstra’s Medium post that detailed alleged emotional and sexual abuse.

Nerdist mentions that it’s their parent company that “completed its investigations into the allegations against Chris Hardwick and issued a statement on our site that reinstated a mention of Hardwick as the founder of Nerdist, which is factually true.” Talk about damning with faint praise. Factually true.

The statement then expresses Nerdist’s “ongoing support” of victims of women and victims, and reiterates that their business relationship with Hardwick ended in 2017. The rest of the Nerdist statement is filled with resources about sexual assault and suicide prevention, as are their followup tweets.

Yet many of the replies to Nerdist’s statement on Twitter are angry Hardwick fanboys and fangirls who still take issue with the accusations against him by ex-girlfriend Chloe Dykstra and wave AMC’s “investigation” around as proof positive that Chris Hardwick did nothing wrong.

We need to address this so-called “investigation,” which Dykstra chose not to participate in, saying that she was choosing to move on with her life. People appear to be confused about what such an investigation would have constituted, seeming to believe it involved law enforcement or “the authorities” clearing Hardwick of all alleged wrongdoing.

The network’s investigation was conducted by the firm of Loeb & Loeb, which is an odd choice, as they have represented the interests of the Hearst family in the past. Hardwick’s wife, Lydia Hearst, is a Hearst heiress, and Hardwick is, by marriage, a member of the Hearst family. I’m no tin-hat conspiracy theorist, but it’s a sketchy ethical move—a potential conflict of interest on the law firm’s behalf, if nothing else.

The firm was not hired to directly investigate the truth of Dykstra’s allegations. As mentioned above, she did not participate. They were assessing Hardwick’s behavior in terms of AMC and its Hardwick-related properties, in terms of whether he was an active legal liability at the network. This was supposed to be strictly business, and if none of their interviews with “numerous” people uncovered abusive behavior by Hardwick while he was at work, well, that’s apparently that for AMC.

This is problematic for several reasons: We have no idea who the firm spoke with, and whether these people would have been in a position to speak out against Hardwick should they even want to, given the power dynamic in play, and Hardwick’s enormous influence and stardom. In addition, there’s the obvious fallacy that someone who theoretically behaves themselves at work should be cleared to continue to do so despite troubling abuse allegations.

How one presents in public, to some coworkers, is no indication of what they’re doing behind closed doors, or how they’re behaving with others. Ongoing discomfort with Hardwick’s reinstatement would appear to be evidenced by the recent departure of several female staffers from his show, The Talking Dead; it’s not a situation that these employees should have had to face.

Yet the replies to Nerdist’s statement demonstrate the culture that so many victims encounter: total disbelief and cruel disdain, plus the idea that this “investigation” has somehow scrubbed Hardwick clean of Dykstra’s allegations.

There would be no Nerdist if it wasnt for Chris. He is the founder and should be mentioned on the site somewhere even if he no longer works there. He also got his job back on Talking Dead. Its 2018, if he did anything wrong he wouldnt be back on either! Keep crying!

Oh, let’s not forget the pearl-clutching that those accused are going to lose everything and have their lives ruined.

Well AMC appears to support him. Like I said, its 2018. The guy almost lost all his job over accusations! Hey Courtney should I tell everyone about how you abused me 5 years ago? OH wait noone would believe me either cuz I dont have evidence.

At least some replies seem to understand what’s happening here.

Or, AMC didn’t feel that psychological abuse was enough for them to give a shit. Or maybe they just don’t care about women. Either one sounds more credible than a basic cable network conducting a credible investigation into one of its stars.

Again, it’s 2018, apparently a scary byword for accountability for one’s actions, so anyone “cleared” surely must be innocent.

You’re assuming the investigation wasn’t just for show. And even if it wasn’t, we don’t know the specifics.

I read Chloe Dykstra’s post. It was believable and infuriating. And she had nothing to gain by lying. But hey, believe whatever you want.

But let’s really get to the heart of how many Hardwick fans feel. Don’t mince any words, now.

That trash like that cheating lying whore chloe something are the worst thing that can happen to actual VICTIMS? And that the only VICTIM in this whole drama was Chris, who did nothing wrong, and almost had his entire life destroyed by a vengeful ex because of SJWs?

how about a link for batshi*t crazy exes to call when they’re off their meds?

Folks still seem to be confused about the nature of the investigation conducted at AMC.

People need to stop acting like this proves anything. It only proves he isn’t a liability to them

They wouldn’t, considering the firm doing the investigating has ties to his wife’s family.

They are also extremely confused about how human relationships can work.

I didn’t realize you were there when it happened

I appreciate the Twitter users who are taking the time to calmly respond to the incendiary language used against Dykstra and Nerdist. While people are certainly more than free to stan Chris Hardwick, the instinct to viciously attack Dykstra and her supporters in the same breath seems to go hand-in-hand more often than not. I wonder why that is?