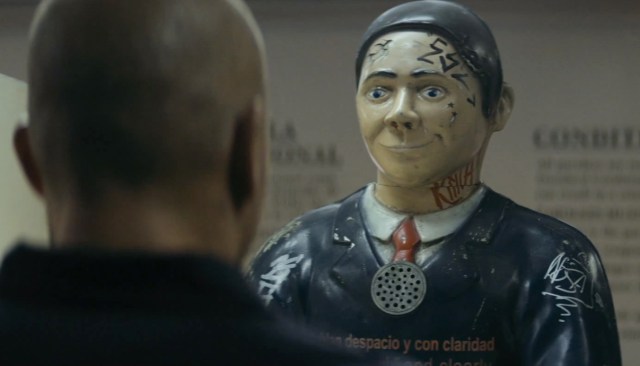 Look, you’d be hard-pressed to find a human being to admit they’re wrong on what color a particular dress is, let alone admit their million dollar film was poop. Neill Blomkamp, I salute you!

After District 9 I, like many of you, were excited at the prospects of Blomkamp’s Elysium. And then I saw it. It was… not great. But it should have been!

Speaking with Uproxx on his Chappie press rounds, the director discussed Elysium’s failure:

You mentioned your frustration with negotiating Hollywood. Does it become more difficult when your first movie is as successful as District 9, then Elysium underperforms?

No, any frustration I feel with Elysium is with myself. I think I’m lucky, at least for this phase of my career, I’m lucky in the sense that I don’t feel a lot of pressures I think other directors feel. I don’t have District 9 be successful and then have Elysium be not successful and then beat myself up over it because of how the audience perceives them. Do you know what I mean?

So, let’s say you make District 9 and it does well. So, now, a normal director is like, “Sh*t, I’ve got this pressure because this last film did well and I hope this one lives up to it.” I don’t have that. It definitely doesn’t bother me. The thing that bothers me is if I feel like I f*cked it up.

Do you feel you f*cked up Elysium?

When asked what he would have done differently:

I feel like, ultimately, the story is not the right story. I still think the satirical idea of a ring, filled with rich people, hovering above the impoverished Earth, is an awesome idea. I love it so much, I almost want to go back and do it correctly. But I just think the script wasn’t… I just didn’t make a good enough film is ultimately what it is. I feel like I executed all of the stuff that could be executed, like costume and set design and special effects very well. But, ultimately, it was all resting on a somewhat not totally formed skeletal system, so the script just wasn’t there; the story wasn’t fully there.

This. Exactly this. Everything about Elysium should have made for a great film, but it didn’t. The idea was there, it just wasn’t executed properly. For these words and more, Mr. Blomkamp, we’re very excited to see what you and Sigourney Weaver will do with the Alien franchise. Onwards and upwards, as they say.