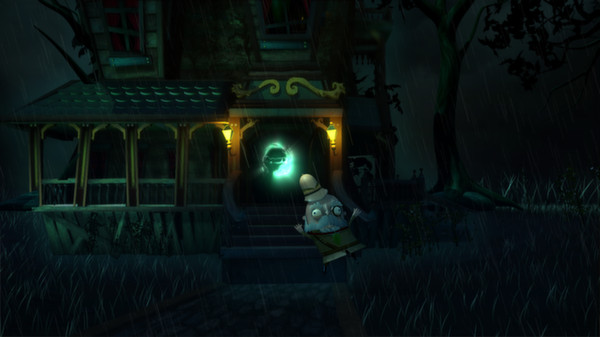 Hearken back to 2013, and you may recall mention of Neil Gaiman teaming up with The Odd Gentlemen to create a video game. If that news had you all a-flutter, then get your mice and keyboards ready: The game in question, Wayward Manor, will be here in just two weeks. Huzzah! Hooray!

Wayward Manor casts the player in the role of a grumpy ghost, trying to get his house back from its new owners. The player must unlock the mansion’s secrets, then use them to inflict psychological terror on the living residents. I am 100% on board with this. I mean, just read this description from the game’s Steam listing:

The Budds, a dysfunctional family of misfits and eccentrics, have brought their own abysmal possessions into your humble abode and stifled your power. Each level is a playground for scares where players earn fear to take back control of the room. If you want free reign over your mansion once again, you must drive the Budds mad with fear using only your imagination and their hideous belongings.

This is Neil Gaiman’s first time in video game territory, but I’m expecting good things. The teaser trailer (embedded below) hints at that signature blend of spooky, quirky dark comedy Gaiman is known for, plus the words “puzzle adventure” are pretty much all that’s needed to get me through the door. The game will be released for PC and Mac, and will be available on July 15 from both Steam and the Humble Store. I’ll definitely be playing.

Previously in things by Neil Gaiman