Netflix, You Know, for Kids! 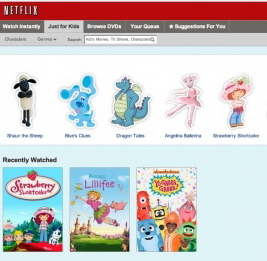 Netflix has started testing a new user interface of programs for kids. The separate children’s content section is being designed for kids to use themselves. Select Netflix users have been given access to the new section for testing. On the main Netflix site, users who have the trial section will see a tab labelled “Just for Kids” that allows children to select a program based on the character from that show.

By clicking on one of the characters, kids will be taken to a new page that lists the television shows and episodes starring that character, each episode is previewed by looking at a screenshot. This is so kids don’t necessarily have to be able to read to find what they are looking for. If all they know is they want to watch Blue’s Clues, they’ll be able to make that choice by recognizing the puppy’s picture.

Right now this feature is still in the trial phase, and it is unclear if this will be the user interface that Netflix sticks with. In the past, Netflix has run trials on several other options before making new design decisions, so it is highly likely that they are considering other layouts. Whatever it looks like, they are definitely going to be launching a kid-friendly section at some point in the near future, which is something kids (and parents) can be excited about.