Disney’s The Jungle Book was a visually stunning feat of CGI that really showed off the talents of Neel Sethi, the young actor who played Mowgli. 11 years old at the time, Sethi faced the challenging task of acting alongside screens, men in blue suits, and foam like they were spirited animals in a dense wilderness.

In this animated interview with Oh My Disney, Sethi talks about how crucial imagination was for him working on this film and how seeing puppeteers as animals eventually became “second nature” to him. Also, how adorable is it that the puppeteer would tickle Sethi’s neck to make him run faster?

On seeing the completed scenes for the first time, Sethi says:

When I saw the trailer and I saw some scenes, I was like, “Oh my god! That’s real! But, how is that real? I wasn’t with that!” Basically the whole movie was imagining. Without my imagination there would be no acting and I would be looking at a wall and it’d just be a wall and not an animal. I would just be like “Hello. I’m scared. Bye.” That’s basically what I would be doing.

Oh My Disney also shared some behind-the-scenes photos of the film, and it always blows my mind to think how much this role demanded of Sethi’s imagination and Jon Faveau’s, as they both told a story with invisible animals. Just look at this image and compare it to the incredibly detailed world they built in the final product! 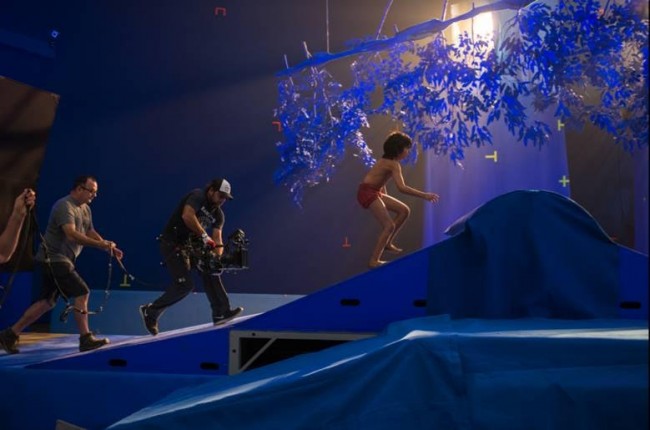 The Jungle Book is available for purchase on Digital HD today, and on Blu-ray August 30.