Neil deGrasse Tyson Calls Out Some Fuzzy Math in Prometheus 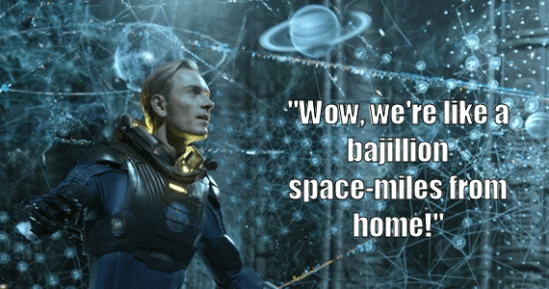 Everyone knows that sci-fi movies are going to fudge their science a bit, otherwise they wouldn’t be sci-fi. That said, some fudges are just mistakes and they can be glaring if you know your stuff. Acclaimed astrophysicist and meme Neil deGrasse Tyson — the man who called out Titanic for having “the wrong sky” — is still out there doing what he does best: Busting chops. This time, he’s got Prometheus in the sights.

Prometheus goes 35 light yrs into space, but CharlizeTheron gaffes “We’re a half billion miles from Earth”- just past Jupiter

That said, it’s not the most offensive error ever and probably the symptom of laziness more than anything else. I’m pretty sure that one would have slipped past me if I were watching the movie, or even if I’d been writing it, but I’m no spacestrophysicist. The lesson here is that you should have some math people check your math, or rather, have them check to make sure you actually did some math.

Errors and less-than-perfect reviews aside, we’re still pretty excited for the film. I mean, if the teasers are this good, the movie has to be pretty watchable. They could refer to light years as a measurement of time for all I care. Besides, I’m sure they’ll blow up plenty of things to make up for the space-math gaffe, and that’s good enough for me.

Watch out, we’ve got some links over here