So, As It Turns Out, That Comics Retailer Who Boycotted Action Comics Just Wanted Attention 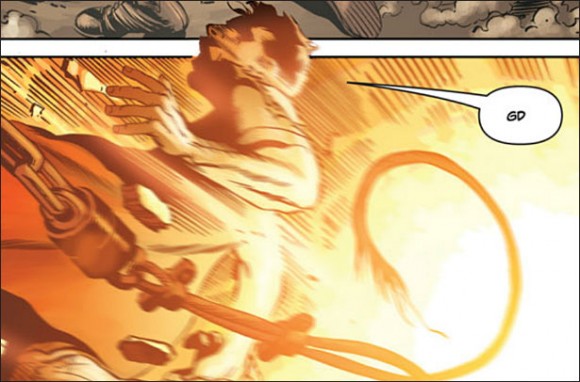 Yesterday, you may recall that a comics retailer in Asheboro, North Carolina boycotted Action Comics because of the panel pictured above, which features Superman uttering “GD” after sustaining the effects of an explosion. Jeff Lamb decided that this egregious affront to his religion merited a boycott of Action Comics and then he called its writer, Grant Morrison, a “liberal Scottish schmuck.” Well, Morrison has responded to the boycott, which has since been lifted. But wait until you see what Lamb sells that he didn’t think was worth a boycott.

“It should go without saying that the offending panel and caption, a mere ‘GD’, is a sound effect grunt – to suggest Superman’s breath being forced through gritted teeth – much like ‘DHH’, ‘GNUHH’ or the many others used throughout this book and in general in the comics business. It’s not in any way representative of God or a curse.”

Lamb then responded with his own statement, in which he ended the boycott:

Thank you Grant Morrison. The boycott is lifted. Once again my apologies to Grant for the unwarranted name calling. Thank you to those who supported my stance. To those who didn’t… I respect your opinions. To those who only posted to bash Christians and people with opinions different from yours… grow up and get a life.

We could say something about Mr. Lamb not respecting people with opinions different from his own, but instead we’ll turn to Reddit, where one user dug up a panel from a comic that Lamb admitted to selling at his store, The Comic Conspiracy, Crossed. While Lamb has said that he can only “deal with” selling books like Crossed, he certainly hasn’t dealt with them by raising a big stink about its content and/or refusing to sell them. By the way, here is that panel from Crossed: 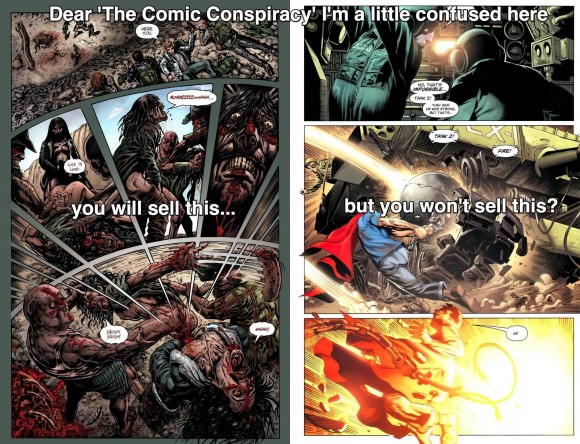 So, yeah. Lamb said that calling for a boycott of Action Comics and all books by Grant Morrison because Superman was pictured saying two letters that also appear in the word “God” but might stand for “goddamn” was totally not a publicity stunt. Meanwhile, he “dealt with” selling a graphic novel depicting a religious family led by a patriarch who rapes his own daughters who takes to the mountains of Utah to escape a plague that involved a cross-shaped rash on the faces of its victims by … continuing to sell it without any public complaint. Or name-calling, for that matter.

Let’s do the math: the DC reboot is getting a lot of media attention, as are the comic book stores that sell them … yeah. Publicity stunt.