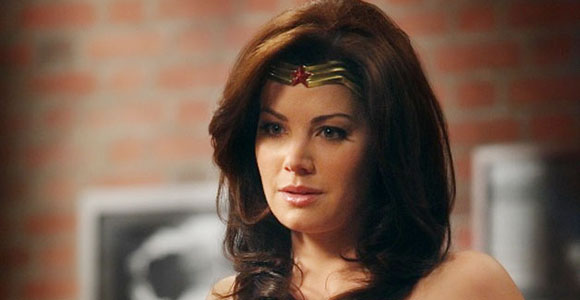 You may think that sounds like the most ridiculous title in the world and you’d be right. This is really happening. Smallville’s Lois Lane, Erica Durance, will be sporting Adrianne Palicki’s failed Wonder Woman pilot outfit when she guest stars on David E. Kelley’s Harry’s Law. We are not amused. Hit the jump for the reveal.

You may remember we brought you news last month that Durance would be guest starring on the NBC dramedy, Harry’s Law. She was set to play “a psychologically infirm woman who retreats into the persona of the DC Comics heroine to help wreak revenge on perpetrators of domestic abuse.” I was already skeptical of Kelley going into Wonder Woman territory again, as well as the concept of her role, but this just takes the Amazon cake. 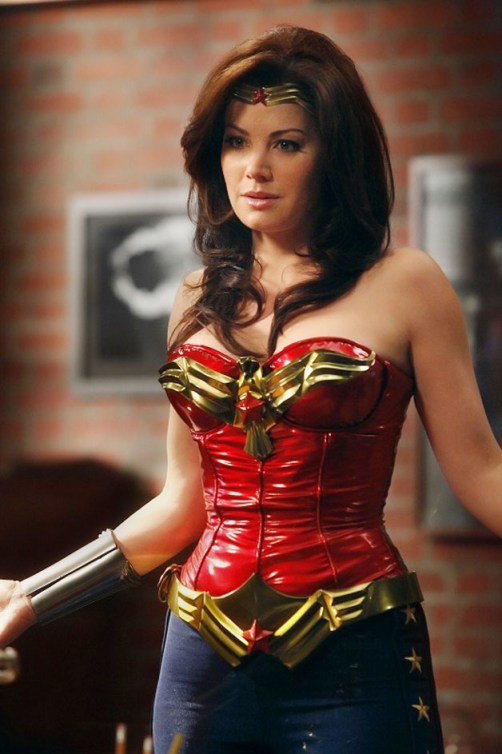 TV Guide spoke with the actress about her role. She said it was easier to play a “sort of” Wonder Woman rather than the real deal because she probably wouldn’t be judged as harshley. “As an actress, getting to put on the suit and play Wonder Woman was fantastic and then I got this whole other layer because of the way David E. Kelley had written it, to ground it in this kind of humanistic viewpoint, which was lovely,” she said also adding that putting on the costume was daunting. “Partially because having been in the comic world for a while now, I’m really very respectful of the people that love this character. I do take it very seriously.  As a side note, just to be light about it, any woman wearing tight pants is not super excited the first time she puts them on. [Laughs] I wasn’t exactly, you know, tight pants- or underwear-ready.”

And yes, there’s more. “The best part is the corset, believe it or not, because it gives you a tiny little waist, making you sit up really straight. I would say the most uncomfortable part is tight, stretchy pants because, well, you know what you feel like when you’re wearing tight, stretchy pants. You just have to be careful everything is appropriate,” she said. “I’m very grateful for the pants. I know that people were very excited about the underwear and seeing them. To be quite frank, I don’t know if I could’ve done the underwear justice at this point in time and it might have been more upsetting for people to see me in them than to not, so I think the pants are a safe bet for me.” 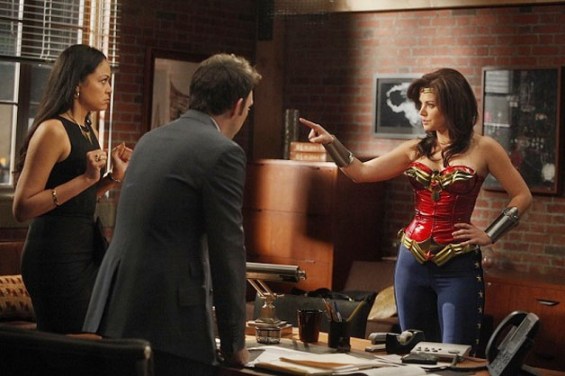 I can’t…I just…I can’t. Let’s put Durance’s self-consciousness aside for a moment. I see what you think you did there NBC. You and Kelley think it was a cute nod to your high profile project. “We’ve already got Lois Lane! Let’s put her in that Wonder Woman costume, fans will love it!” No. No, they won’t. First of all, this just looks lazy to me. You have costume designers working for you and I’m sure they would love the chance to design a Wonder Woman outfit. Instead, you reuse something from a project everyone hated. Secondly, everyone hated your Wonder Woman project. We do not have good feelings about it. You are just making us angrier that you failed to bring one of our favorite characters to life and squandered a huge opportunity. This just feels like a slap in the face to fans.

You may recall, Durance put on a Wonder Woman-esque costume back in her Smallville days when they dressed her up as an “Amazon Princess” for a convention episode. Here’s the side by side comparison of her look from Harry’s Law with Palicki. 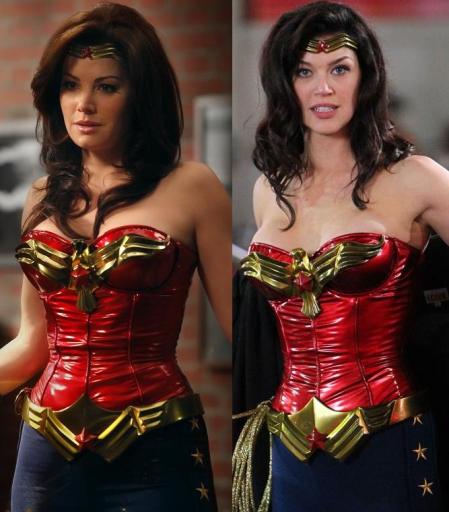 Durance also told TV Guide she’s not really trying to get away from genre work after Smallville. “I just believe things come your way that are meant to come your way and you’ll know when you see it whether you want to do it or not. I think that most of us actors are put in a box of sorts. We’re labeled,” she said. “You can do your best to step outside of that a little bit here and there and have some fun with it, but you also have to understand that and embrace it and enjoy it.Personally, I’m just grateful to work again.