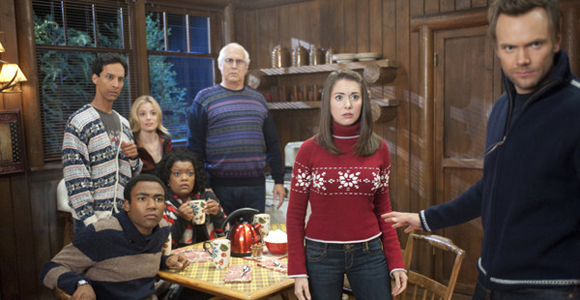 Anyone who had hope that this wouldn’t be the final season of Community may want to start preparing themselves to mourn the loss. After promoting the season premiere of the NBC comedy for months as October 19, the network has decided to delay it and start airing it again at some possible point in the future. Did they have a hot new show they needed to push in their time-slot instead? Nope. THey’ll be airing repeats of Grimm.

Given the success we’ve had for the past four weeks—including winning the first week of the season in adults 18-49, we’ve decided to continue to concentrate our promotional strength on our new NBC shows that are scheduled Monday through Wednesday and have therefore decided to hold Community and Whitney from their previously announced premieres of Oct. 19,” NBC says in a statement. “Without having to launch these comedies on Friday at this time, we can keep our promotion focused on earlier in the week. Plus, we will have both comedies in our back pocket if we need to make any schedule changes on those nights. When we have a better idea of viewing patterns in the next few weeks, we will announce new season premieres of Whitney and Community.

I’m pretty sure you wouldn’t need to do any more promotion to get Community fans to tune in at this point but geeze, haven’t they been through enough?

The cast are still in the midst of filming the season and “the web series formerly known as Inspector Spacetime“ is in full swing, but at this point we’ll just have to wait and see what NBC decides to do.