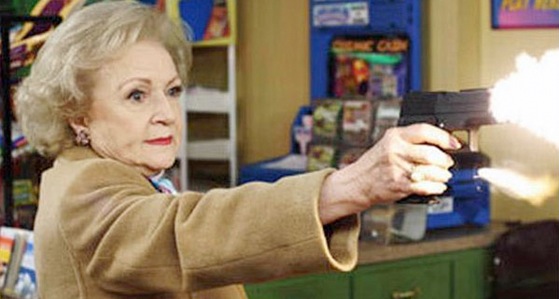 This upcoming January, Betty White will celebrate her 90th birthday, and as a token of appreciation, NBC has set aside two primetime hours on January 16 to devote solely to this legendary lady. It will not only be a birthday tribute, but also a look at White’s new hidden camera show … wait, Betty White is adding another show to her dance card? And she’s 90? Okay, it’s official: Betty White is making us look bad.

January 16 is actually the eve of White’s milestone birthday, which is on January 17. (A blogger at The Mary Sue whose name rhymes with “Mamie Schrevelly” may or may not share that birthday.) And starting at 8:00 PM on January 16, the festivities begin: first up is a 90-minute special celebrating the career of Miss Betty White, Betty White’s 90th Birthday: A Tribute to America’s Golden Girl. Expect montages galore, flashbacks, vintage Betty, and lots of people talking about how excellent Betty White is. The best part about that is that we know they will be genuinely psyched to do so, and we will be psyched to watch.

After that, Betty White’s new show, Off Their Rockers, will get a preview at 9:30 PM. As of right now, the show has not been picked up for series. Based on the UK show, Benidorm Bastards, a bunch of senior citizens run wild in the streets to pull pranks on the young ‘uns while a hidden camera captures the ensuing shenanigans. You may also recall that White is also currently acting on the TV Land sitcom Hot in Cleveland, which will also be devoting an episode to its star.

No other details on who will be appearing in the tribute, but it will be broadcast live from the Biltmore Hotel in Los Angeles.

Hey, remember when Betty hosted Saturday Night Live and people were all, “Oh my, but will she last the night??” and then she was in basically every single sketch and went on to party ’til the rise of the morning sun and score the show some huge ratings? Yes, let’s definitely celebrate this woman and her 70-year career.