Natalie Dormer Talks About Her Shocking Shaved Hairdo For The Hunger Games: Mockingjay 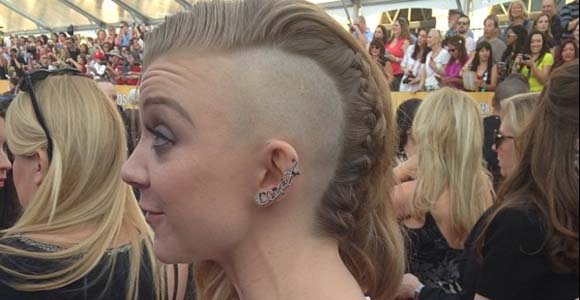 Game of Thrones star Natalie Dormer made a huge splash on the red carpet of the SAG Awards this past weekend when she showed up with half of her hair missing. Hit the jump for what she had to say about it but more importantly, Natalie, can we talk? I’ve been wanting to do this to my hair for a while.

Seriously though. I have really long hair and have been on the verge of cutting it off for a while, specifically for some sort of partly-shaved look. So when I spotted Dormer’s new do, I was very jealous.

We guarantee #GameofThrones‘s Natalie Dormer has the boldest hair you’ll see all night at the #SAGawards. pic.twitter.com/3Jws5YQiYi

If you hadn’t already heard, the actress did this for her role as Cressida in The Hunger Games: Mockingjay. In the book, news director Cressida is described as having a shaved head which is tattooed with green vines. In my mind, that meant she had no hair whatsoever, but the creators decided to open it up a bit to interpretation. Though Dormer told Entertainment Weekly she was committed to doing “a full Anne Hathaway” if necessary.

“Francis Lawrence, the director of Mockingjay, and I discussed it and I took the job on the premise that I would possibly [have to] shave my whole head. I’m actually really pleased that we went halfway because I think it’s more the Capitol… and that’s where Cressida comes from,” she told EW. “She comes from the Capitol, so she’s got a stylized thing going on and now she’s turned rebel. I think it’s right for the character.”

The big shave happened back in October, so the actress has been having to keep it hidden until now. To help me with my decision, Dormer thankfully also mentioned how it feels to be half-haired.

“It was a bit weird lying in bed for the first few nights. [One] side feels normal, [the other] side doesn’t feel so normal against the pillow,” she said. ”[And] hats fit differently.”

To be sure, it is a lot of look to carry. Still unsure of it for myself but Dormer rocks it.