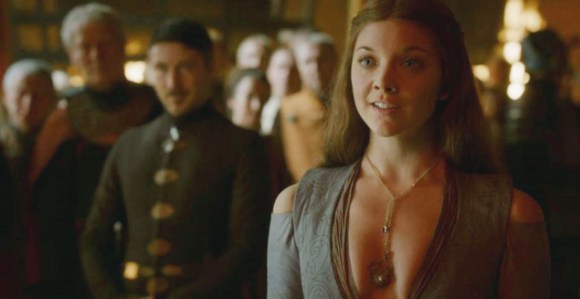 Game of Thrones’ Natalie Dormer is a newbie to the fan convention scene (I was there for her first appearance!). That being said, her initial interaction with fandom could have gone in one direction or the other. Thankfully, she had a great experience. See what she had to say about her interactions with Margaery cosplayers and her own costume encounters from the HBO series.

Speaking with Entertainment Weekly, Dormer recounted her experience at the C2E2 convention earlier this year.

“That was my first convention, my virgin convention experience,” she remembered. “Other members of the crew and cast said, ‘Someone will come up to you dressed like your character. It’s going to happen and it’s going to blow your mind how weird and amazing it is.’ And it happened. A girl came up to me completely dressed like Margaery and I was fascinated because she’d really studied the detail of the costume. Obviously, I know the real costume inside out, but the pleating and the detail of the embroidery and the necklace she was wearing was so accurate. It was terrifyingly accurate how well the fan base knows you and your costumes. It’s the biggest compliment you could hope to get. I was looking at her plunging neckline and going, ‘You must be cold. I know what that feels like.’”

She certainly does. Viewers know the actress is given some of the more revealing outfits on the series in order to show she’s more fashionable than the rest of the court.

“There’s so much infrastructure in Margaery’s costumes because my breasts don’t naturally sit in that position,” she said. “They’re incredibly made.” But for getting into character, the actress said, “The key is the wig. The hair department on Game of Thrones is incredible. I go from my long blonde hair to this brunette color…I look in the mirror in the hair chair and that’s when I see Margaery.”