NASA’s Curiosity Rover Checks in on Foursquare, Probably Only Candidate for Mayor 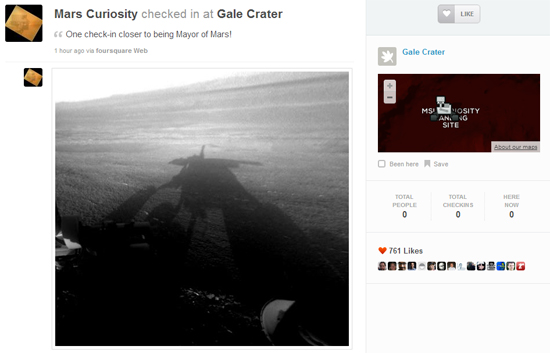 In what is surely the best use of technology to date, NASA’s Curiosity rover that happens to be performing serious science on the surface of Mars just checked in via Foursquare. This is obviously the best way to tell that it’s actually on Mars, though we probably can’t meet up for drinks. All snark aside, the rover’s almost guaranteed to become the mayor in short order due to a dearth of competition. What perks this might entail aren’t exactly known at the moment.

Most excitedly, throughout its 23-month exploration of Mars (which began last month), the Mars Rover will continue to check in and share updates on Foursquare.

To explore the Red Planet alongside NASA, simply like the Mars Rover’s page. While on Mars, the rover will conduct several experiments to try and track down traces of past microbial life, and share pictures and updates along the way.

So, yeah, this is a thing that will continue to happen whether you like it or not. Frabjous day.