Your carbon footprint is off the hook for this one. 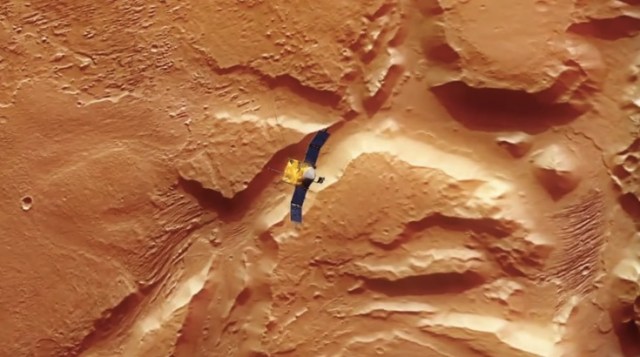 Studying Earth’s climate has grown too contentious, so NASA’s brilliant scientists sent a satellite to orbit Mars and study its less politically divisive atmosphere. Or they just really want to learn more about how Mars works, since they’re getting kind of tired of just sending robots there and sending people is dangerous.

So far, the evidence shows that Mars once had a much thicker, warmer atmosphere, but over time, that atmosphere has seeped off into space and made sure the planet ain’t the kind of place to raise your kids. In fact, it’s cold as Hell. That phenomenon is usually attributed to the planet’s small size, which leaves it unable to keep the atmosphere held down with its gravity, but the Mars Atmosphere and Volatile Evolution (MAVEN) will help us better understand the exact process.

MAVEN reached orbit around the robot-laden planet last night at 10:24PM EDT after a 10-month journey. NASA administrator Charles Bolden said, “As the first orbiter dedicated to studying Mars’ upper atmosphere, MAVEN will greatly improve our understanding of the history of the Martian atmosphere, how the climate has changed over time, and how that has influenced the evolution of the surface and the potential habitability of the planet. It also will better inform a future mission to send humans to the Red Planet in the 2030s.”

In addition to helping us get our asses to Mars (sorry. I legitimately cannot write about going to Mars without this Total Recall joke. It’s a problem), MAVEN will also get to hang out as the other Mars robots image comet Siding Spring when it comes just within 82,000 miles of the planet. Our own moon is about 239,000 miles away, so 82,000 is a pretty close view. MAVEN will hunker down and ride out potential danger from particles coming off of the passing comet as Opportunity, Curiosity, and Mars Reconnaissance Orbiter take images.

Then it will resume its normal work of investigating climate change that was definitely not caused by humans. Martians, on the other hand, might have some explaining to do.

(via NASA and Space.com, image via NASA)