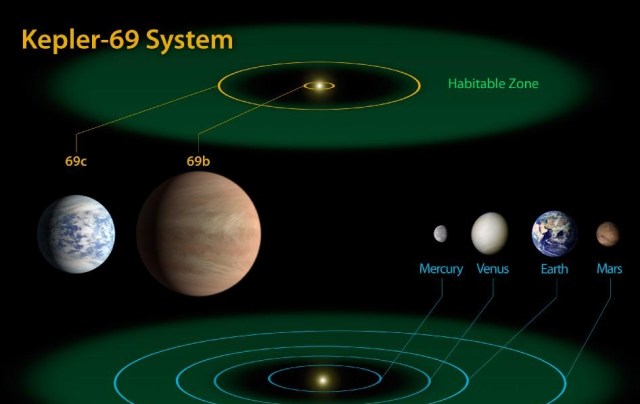 Thanks to NASA’s Kepler mission, we now know about three new super-Earth-sized planets that fall in the “Goldilocks” zone of a star’s orbit,where the surface temperature of a planet could hold liquid water. The planets are spread over two different systems, Kepler-62 and Kepler-69, which each have multiple planets, but the ones you should be excited about are Kepler-62e, 62f, and 69c.

Of the three newly discovered planets, 62f is the one closest to the size of Earth. It’s only 40% larger than our planet, which also makes it the closest in size to Earth of any known habitable exoplanet. It’s neighbor 62e is 60% larger than Earth, and it’s located on the inner edge of the habitable zone of the Kepler 62 system.

The largest of the three habitable exoplanets is Kepler-69c, which comes in it at 70% larger than we are. 69c also orbits a star very similar to our Sun, while the star at the center of the Kepler 62 system is smaller and cooler than the Sun.

There is not enough data on these planets yet to say whether any of them could actually support life, but we know that they fall in the right region of their respective systems for that to be possible. The continuing discoveries of new planets in habitable zones keep bringing us one step closer to finding a habitable world nearby.

It’s these discovers that make Kepler a “rock star of science” according to NASA associate administrator of the Science Mission Directorate John Grunsfeld.