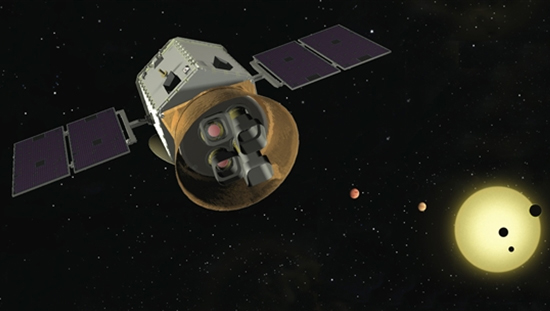 We’ve already spotted more than 800 exoplanets beyond our solar system, and more than a hundred of these were identified by NASA’s Kepler mission in the four years since its launch — and that’s just what Kepler has come across by very intently gazing at one small patch of the sky. Now, NASA has its sights set on even more worlds, green-lighting the new Transiting Exoplanet Survey Satellite (TESS), a spacecraft set to launch in 2017.

This is a serious upgrade to NASA’s ability to track down exoplanets, as TESS, the result of a 3-year contest and a $200 million grant at MIT, won’t be limited to the narrow patch of sky that Kepler has been watching. It will get a look at the whole picture.

According to NASA’s announcement:

“TESS will use an array of telescopes to perform an all-sky survey to discover transiting exoplanets ranging from Earth-sized to gas giants, in orbit around the nearest and brightest stars in the sky. Its goal is to identify terrestrial planets in the habitable zones of nearby stars.”

Not only will this new spacecraft cover more than 400 times the amount of sky than any previous mission, it’s specifically tuned to stay on the look-out for rocky, Earth-sized worlds. George Ricker of the Massachusetts Institute of Technology, and TESS’s lead scientist, said, “The TESS legacy will be a catalog of the nearest and brightest main-sequence stars hosting transiting exoplanets, which will forever be the most favorable targets for detailed investigations.”

Ricker’s words might translate — particularly to impressionable sci-fi fans — as a familiar sentiment: Once we burn through the last of Earth’s resources, humanity is going to need to find a new home somewhere in the habitable zones beyond the Solar System where water can exist. If they get started soon, TESS and its successors could show us where to look for likely candidates. Getting to any of those planets, of course, is another matter, but hey, one thing at a time.

TESS is seen as the first of a new generation of dedicated exoplanet hunters. We’ve still got four more years before it launches, though, and Kepler isn’t finished yet. Despite its smaller field of vision, the observatory has already spotted 2,740 potential worlds and a promising prevalence rocky planets in the Milky Way since its launch in 2009. So we say thanks for your service and keep up the good work Kepler…but be ready to go gracefully when the new kid gets called up in a few seasons.