NASA to Hold Press Conference on Mercury Today at 2PM, Disappointing Everyone [Updated] 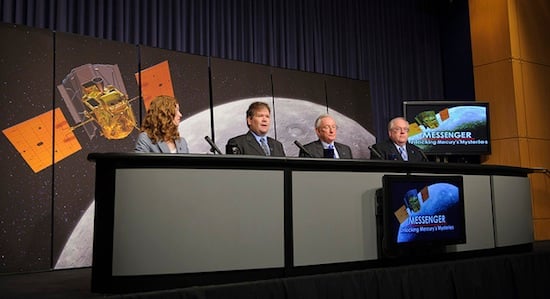 Since NASA‘s tease last week about “historic” new findings on Mars, the world’s been anxiously awaiting details about what the Curiosity‘s been up to on the red planet. That’s why the news that NASA will be holding a 2PM press conference today has everyone in a tizzy. Unfortunately, it wasn’t meant to be as today’s press conference is not about Mars, but will reveal new findings from the MESSENGER spacecraft orbiting Mercury. Don’t take it personally, Mercury. You’re interesting too; we just really want to hear what they found on Mars.

Today’s Washington press conference will reveal findings from the Mercury Surface, Space Environment, Geochemistry, and Ranging (MESSENGER) spacecraft, which has been orbiting the planet Mercury since March 2011. Earlier this month, NASA revealed findings from MESSENGER about a series of never-before-seen in the solar system landforms.

We’ll have to keep waiting for news from Mars. NASA is double-checking their findings before they make an announcement about them, and it’s expected to happen at a meeting of the American Geophysical Union from December 3rd through 7th, according to Sci-Tech Today.

In the meantime, we can all catch NASA’s live stream of today’s press conference, embedded below for your convenience. Let’s see what you’ve got, Mercury.

UPDATE: It’s water! NASA is saying they have found evidence of abundant frozen water in the dark polar craters of Mercury. It’s certainly not a “life on Mars” level discovery, but we’ll take it.