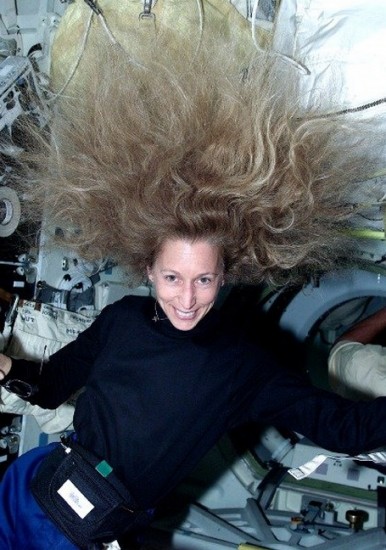 The astronaut pictured above with the glorious mane is Marsha Ivins, who worked for NASA for 36 years and flew on five shuttle missions before leaving the agency. Normally, her hair falls like regular hair, however in the picture above, she and her hair are in zero gravity. It’s quite a sight to behold, the subject of many a giggle, even at NASA. However, when those pictures were made public, industrial safety engineers who didn’t work for the agency expressed some concern about the hazards of long tresses in zero gravity. NASA issued a memo, then its astronauts wore … bald caps.

As a goof, possibly a tiny, fun protest of the new rule asking astronauts with long hair to please contain it somehow so it doesn’t pose any risk around mechanical equipment, the crew of the STS-54 mission — which included Mario Runco, author of the “counter-memo” we’ll picture below — sported bald caps with aviator sunglasses on their way to a practice countdown. It was meant as a “tribute” to astronaut Story Musgrave, who was bald and didn’t have to worry about tying his hair back. So, wanna see a crew of astronauts wearing bald caps? Click this photo (from Flickr user Alertfive) to embiggen: 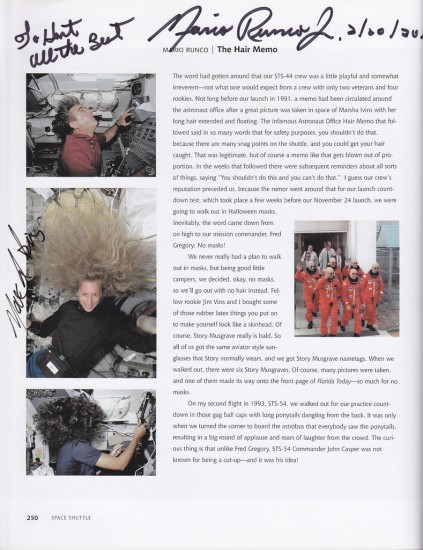 I don’t know, I think if you’re in a cozy spot free of possible snags, you let that hair float. How many people actually get to achieve that without the annoyance of static electricity?