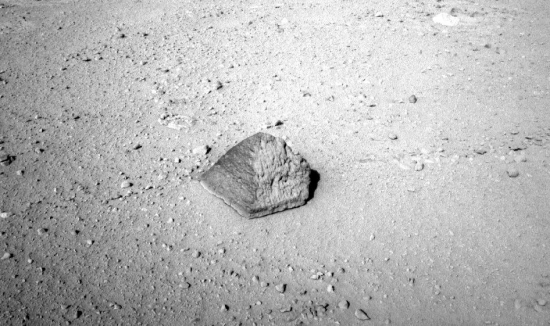 What better way to honor NASA engineers that have passed away than to name Martian rocks after them? The obvious answer is to then perform science on those rocks. That’s what’s happened to Jacob Matijevic — the person — after he passed away at the end of August. Matijevic had been the surface operations systems chief engineer for the Mars Science Laboratory and the Curiosity rover prior to his death. In a somewhat morbid twist, Curiosity is now performing science on the rock named after the man.

The rock named Jake is about 25 centimeters (10 inches) tall and 40 cm (16 in) wide at the base, so it’s not a very large rock, nor is it very eccentric. It likely is a shapely lump of basic basalt ejecta. It is uniform in color and is actually similar in size, shape and composition to the first rock studied by the Spirit rover over eight years ago. But being a rather ordinary rock is a good thing, said [John] Grotzinger.

“The science team has had interest for some time to find a rock that is relatively uniform in composition to do comparisons,” between the ChemCam (the laser-zapper tool) and the Alpha Particle X-ray Spectrometer (APXS), Grotziner said, to calibrate both instruments, especially the ChemCam, which is a new version of an instrument that is on the MER rovers.

So, moral of the story here is that if you die and someone names a Martian rock after you, chances are that science isn’t far behind experimenting on your now mineral-laden form.

(Phys.Org via The Verge, image via NASA)