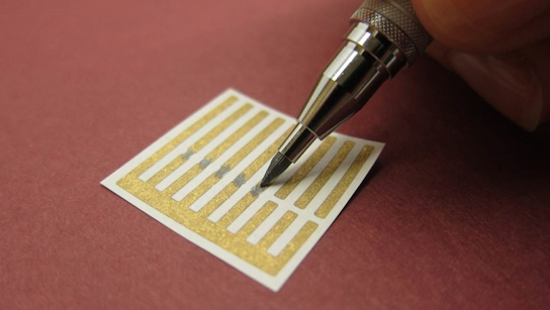 Carbon nanotubes could be a great way to detect toxic gases in environments from hospitals to mines. So far, though, the detectors have been too expensive and difficult to produce to put into wide practice. That could change thanks to the work of a team at MIT who have developed a new method of deploying the nanotubes, which can be tweaked to detect many different types of gases. By compressing the tubes into a graphite-like substance, the ream has made crafting a nanotube gas detector as easy as drawing a line with a mechanical pencil.

The study, published this week in the journal Angewandte Chemie, shows that ammonia-detecting carbon nanotubes can be created in a powder form, and then compressed into a lead that will fit any mechanical pencil. When that graphite draws a line on a specially prepared piece of paper that is embedded with gold electrodes, the nanotubes retain their reactivity to ammonia gas, which is a common and dangerous gas in many industrial environments. That creates a simple circuit on the paper. If the nanotubes encounter ammonia, the two bond, which increases the resistance in the circuit, slowing performance speeds when electricity is applied, and offering a handy way to tell if even trace amounts of ammonia are present well before they can do any harm.

In addition to being simpler to manufacture, the nanotubes become more stable when compressed into their pencil-lead state, giving them a longer shelf life and rendering them more consistent and reliable. That could make ordering and stocking them as a commercial product a much simpler prospect for companies that need to know when gasses could become dangerous to their employees. You know, more so than when Todd from accounting rolls back from having Chipotle for lunch.

While ammonia is a natural starting place for these sensors, the research team is hopeful that they can make small changes to the process to make similar detectors for a wide variety of gasses.