Cells Trapped in Nanoscale Pyramids for Study in 3D 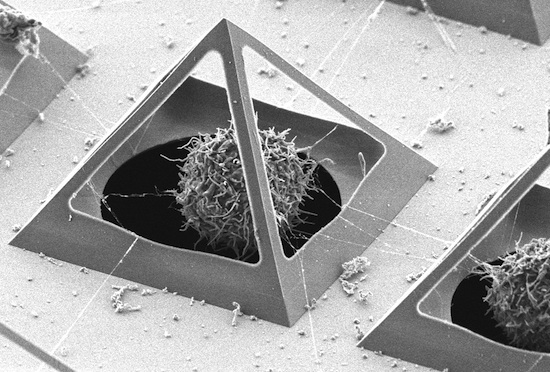 Researchers looking for new insights on how cells interact in three dimensions have a new tool for their studies — nanoscale pyramid structures with open sides. These new structures allow researchers to capture individual cells for study, while still exploring how those cells interact with their surroundings and with other cells.

Traditional two dimensional studies of cells — like the cross sections on a slide or in a biology textbook — teach us a great deal about cell structure. But far from simple 2D affairs, living cells of all types organize themselves in three dimensional patterns, which is why plants and animals are nicely rounded, rather than flat. Studying how cells interact in three dimensions is hard stuff to do, though, as it requires the confinement of individual cells, as well as electron microscopes to study them more closely.

Researchers from the University of Twente in the Netherlands report in the journal Small that they have devised a new way of studying cells in 3D with tiny pyramids. The pyramids are sized to allow just one cell at a time into their confines, but with enough open doors in the structures that cells can still interact with one another.

Resarchers are currently working with cells that work together to build cartilage in the body, exploring the structure of the material that keeps joints in working order. The hope is that better understanding the 3D scaffolding formed by different types of cells will help researchers the world over who are using stem cells to regrow — or build from scratch — functioning human organs gain new insights into how the real things come together.