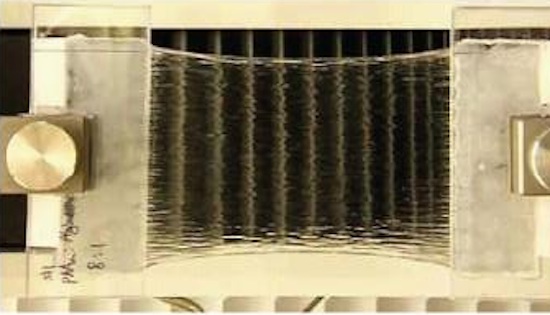 A team of engineers and materials scientists has announced the creation of a new water-based gel that could serve as a replacement for human cartilage. The substance, known as a hydrogel, is a combination of two existing gels. On their own, those gels are weak and brittle. By blending them, though, the team created a substance that seems to be a home run for cartilage replacement, boasting every property they’d want to see in an artificial cartilage for use in joint replacement operations. The high-tech goo stretches to up to 21 times its initial length without breaking, and has self-healing properties that can close small tears with no outside assistance. It’s also extremely strong and biocompatible with humans, meaning it’s less likely that the substance will be rejected on implantation.

The unique properties that make cartilage so useful in the body also make it particularly hard to duplicate — it’s strong but flexible, and also acts as a sort of lubricant and shock absorber that keeps bones from grinding on one another. There have been other attempts to craft artificial cartilage, from using lubricating molecular brushes to employing stem cells to regrow a patient’s own tissue.

Until now, there has been little interest in using hydrogels as a replacement. While the fact that they are water-based and easy to implant safely makes them a good candidate, most of the gels have been far too weak for practical application. Typical hydrogel consistency is about the same as Jell-O, making it largely useless for mimicking tough materials like cartilage.

By blending the two water-based polymers, though — polyacrylamide, the stuff your disposable contacts are probably made of, and alginate, a food thickener derived from seaweed — the team assembled a substance that reinforces and heals itself, becoming stronger than the sum of its parts. The work, detailed  this week in the journal Nature, could also have applications in soft robotics, as a next-generation bandage, or even as a form of artificial muscle.