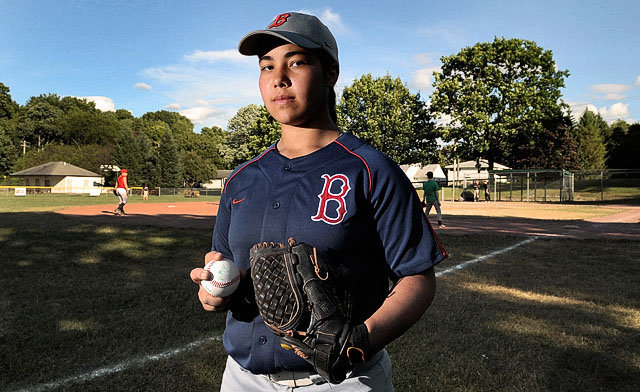 Playing sports is a very gendered experience. After all, teams are often single-gender, and sometimes the game itself is modified depending on who’s playing. Softball, with its bigger ball and underhand throw, is culturally regulated to girls, even though it started as an all men’s sport, while games like baseball and football are thought of as the realm of men and boys. For 11-year-old Nadia Diaz, however, softball just isn’t for her: it’s “too girly” and frankly, she can hold her own on the baseball field. Where else could she find an opportunity to strike 19 boys out while pitching a Little League championship-winning game?

Baseball is something of a family tradition in the Diaz family. Her uncle is Benito Santiago, a former catcher for the San Diego Padres, her second-cousin is former MLB pitcher Nelson Figueroa, and her father, Jose, who used to play at the Double-A level, now coaches Little League. Nevertheless, her family’s baseball greatness isn’t intimidating for Nadia: she’s blazing her own trail, and living up to the Diaz baseball legacy quite comfortably.

She struck out 19 batters during a six-inning division championship. She did give up two hits and a walk, but she struck out everyone else, with one of her strikeout victims reaching first base because the catcher dropped the ball on the third strike. The landslide victory didn’t surprise John Sardino, her assistant coach: “She was dominant before the game started. “I said all week, it’s going to be a 1-0 game. She may be one of the best 11-year-old pitchers in District 8.”

Nadia’s fastball clocks in at over 60 miles per hour, and although she still has work to do on her curveball, she can throw a cutter, a slider and a change-up. When she’s not shutting down batters, she steps in as shortstop, where she batted over .600 this season. Her teammates  call her the “Michael Jordan” of the Southside American Little League, but she prefers to call herself “Big Mama”: her favorite Red Sox player, David Ortiz, is nicknamed “Big Papi”, and her sister decided it was only fitting she adopt a version of his nickname; a big title for a big player.

Although she’s a monster on the pitcher’s mound, in all other aspects, Nadia is your average preteen girl: she has a bunch of Glee posters next to her Red Sox memorabilia, and when her girl friends tease her about playing sports, she just laughs and suggests they try it out for themselves. At first, playing with a bunch of boys intimidated her, but it wasn’t long before she carved a spot out for herself: “There was a tournament at Cortland. They were like, ‘Oh, a girl pitcher. We can so hit her,'” she said. “I got a little intimidated. But I gave it my all. And I struck a lot of them out. It was fun.” Now, she treats her team like her second family.

Nadia plans to try out for the modified team at Corcoran High School next season. The school has already sent a scout to watch her pitch. She must also pass a standardized series of physical tests. She runs every morning to prepare, though she is eligible for one more season of Little League, which she plans to continue: “I love it,” she said. “This is something I want to do when I grow up. I don’t like softball. It’s like too girly. The ball is big. I like something challenging.”

Hopefully, she will go on to inspire all of the future teams she joins, much like she’s inspired her current one — as one of her fellow teammates said, now, “if someone tells you that you throw like a girl at Southside, we take it as a compliment.”

(via Deadspin and The Syracuse Post-Standard.)