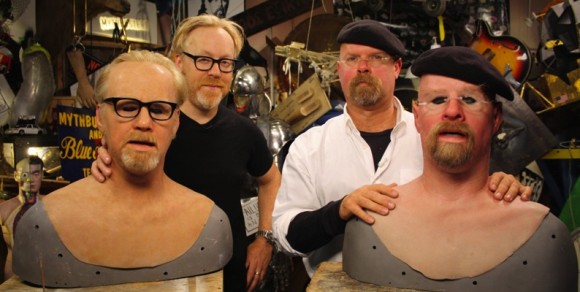 If you like Jamie Hyneman and Adam Savage, you’re going to be very happy about this: the Mythbusters hosts have announced that they’ll be producing a new show for Discovery called Unchained Reaction. The duo will serve as judges on the new show, which will pit two teams against each other while they build the most awesome Rube Goldberg device. And it looks like … yes. Yes, I read that right: there might be guillotines.

The six-part series will feature Hyneman and Savage as judges, plus a guest judge, to decide between two teams comprised of various kinds of “builders.” Teams might consist of all artists, special effects experts, rocket scientists, engineers, etc. Each team will be tasked with building a Rube Goldberg contraption. That is, a complicated, yet oddly straightforward contraption in which a series of chain reactions take place, leading up to a final result. Here is a demonstration of such a thing, courtesy of OK Go:

According to EW, Discovery says that such mechanisms may feature “pyrotechnics” and “large-scale destruction,” as well as “Catapults, flying saucers, and guillotines.” In other words, as they warn on Mythbusters, don’t try this at home.

No exact date was announced, but the series will air on Discovery in March.