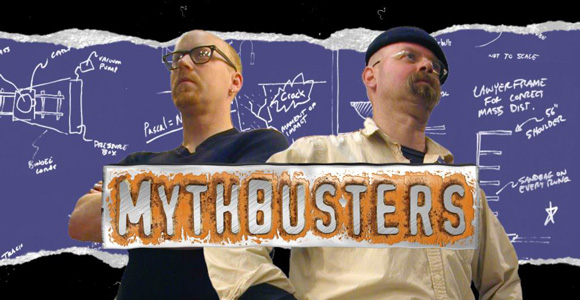 The Mythbusters crew recently busted something other than a myth. The Discovery Channel show had one of their experiments go awry in Dublin, California recently leaving a cannonball-sized hole in someone’s house and another in a mini-van. Woops.

According to the Associated Press, “Producers for the Discovery Channel show fired the cannonball Tuesday at the Alameda County Sheriff’s Department bomb range behind the Santa Rita Jail when it misfired.” The cannonball was meant to fire into a series of water-filled trashcans and a concrete wall when it instead shot 700-feet across a road and into a section of homes.

Sheriff’s spokesman J.D. Nelson, also a consultant on the show said the team had previously used the canon 50 times without incident. “We had some tremendous bad luck and some tremendous good luck” in that no one was hurt, Nelson said. The AP writes, “About 700 feet away, it bounced in front of the Dublin home, then tore through the front door and out a wall on the back of the house. The projectile then bounced at least once more and crossed the road before smashing the window and dashboard of the minivan, where it came to rest.” 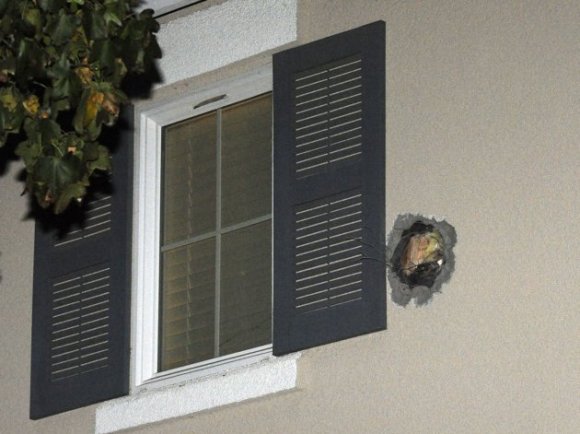 During the testing, a cannonball took an unforeseen bounce from a safety berm. No injuries were reported, but damage was reported in one Dublin home and one parked car. Sgt. J.D. Nelson, Public Information Officer and bomb technician for the Alameda County Sheriff’s office, who is a regular safety explosives expert for MythBusters, was on site and all proper safety protocol was observed. Beyond Productions is currently assessing the situation and working with those whose property was affected.

Residents in the home apparently didn’t even wake up when the cannonball hit their abode. The myth being tested was whether other items could be shot from a canon but it looks like they’ve reasserted that cannonballs are meant for them for a reason. I’m very glad no one was hurt though, I know safety is a huge concern for the television crew.