New Disease Jumps From Monkeys To Humans | The Mary Sue 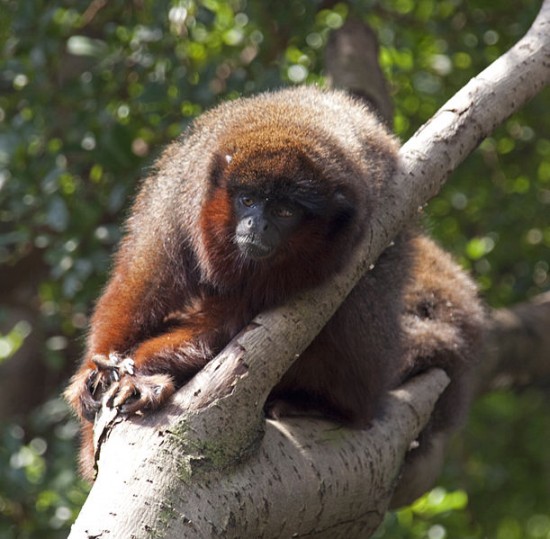 When a single monkey at the California National Primate Research Center in Davis, CA, fell ill with pneumonia, it would have been hard to predict that within just a few weeks 19 monkeys would be dead, and three humans sick. But, that is precisely what happened in May 2009 during the Davis outbreak. Researchers have finally learned where the virus originated, which shows that this is the first ever recorded case of an adenovirus jumping from monkeys to humans.

An adenovirus is a large DNA-based virus, while most other viruses are RNA-based. Adenoviruses are responsible for colds and respiratory infections in humans, in addition to many different illnesses in animals like dogs, horses, pigs, and cattle. But it didn’t seem that this type of virus could jump between species. That is, until that single monkey, an adult male titi monkey, started to cough. Within 2 months 23 or the 65 titi monkeys were sick and researchers were left puzzled by what they identified as a completely new adenovirus. Tracking the outbreak brought researchers to a human worker in the lab who had similar symptoms. But had the monkeys infected the human or had the human infected the monkeys, and where had this new virus come from?

A team of infectious disease researchers led by Charles Chiu of the University of California, San Francisco analyzed the lung tissue of the dead monkeys to isolate the new virus, called titi monkey adenovirus (TMAdV). The researchers knew that the titi monkey could not be the originator of the deadly virus, because hosts that are susceptible to a disease are rarely the starting point.

At the same time that the monkeys were getting sick, a lab worker experienced fever, chills, headache, cough, and a burning feeling in her lungs. Two of her family members were also sick with the same symptoms. Unlike the monkeys, the humans recovered in four weeks without medical care. Blood work showed that the humans had antibodies of TMAdv in their system, confirming that it was the same disease. But the researchers were perplexed because a blood test for the antibodies in a sample of donors in the western portion of the US suggested that the disease didn’t have human origins.

So if the lab worker didn’t infect the monkeys, and the disease hadn’t originated in the titi monkeys either, then where did it come from? The next step for researchers was to test the other species of monkey housed at the primate research center. They found a single healthy rhesus macaque with TMAdv antibodies, which suggests that the disease may have originated in the macaque population and passed to the lab worker or the titi monkeys on medical equipment or some other form of contact.

The results of the study to find the cause of the outbreak were published in the journal PLoS Pathogens. According to the researchers while the virus didn’t prove deadly to humans, the new finding shows that adenoviruses are capable of jumping species. This could open up new possibilities for using TMAdV as a viral vector for gene-therapy in humans, particularly because antibodies for the new virus wouldn’t be widespread in the human population. Chiu has a patent pending for the use of TMAdV for gene-therapy.