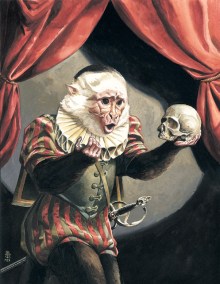 While many of you are probably familiar with the thought experiment about the infinite number of monkeys chained to an infinite number of typewriters eventually producing the works of Shakespeare, few of you have probably attempted this. Programmer Jesse Anderson, however, is giving it his best shot and his million-strong army of virtual monkeys are 99.990% through reproducing the Bard’s corpus. Amazingly, they’ve only been at it since late August.

There are a few middling differences between the thought experiment and Anderson’s approach. First and foremost, Anderson’s monkeys only exist on a computer in the form of software that produces random nine-character strings. Second, Anderson uses an evolutionary approach which saves only the worthwhile character strings and discards the rest. So instead of waiting for the single impossibly lucky monkey that just happens to bang out every word of Shakespeare, the monkeys are working together; chipping away nine characters at a time.

Anderson says that this is, first and foremost, a side project. He was interested primarily in working with Hadoop and the Amazon cloud computing system, though he has since had to move the project onto a local server to save money. On an academic level, Anderson says that this exercise solves an infinite problem with limited resources.

Since beginning the project on August 21 of this year, the monkeys have moved quite quickly and are a hair’s breadth away from completion. However, as of writing only one work, The Lover’s Complaint, has been completed in its entirety. The other plays and sonnets have a few dozen characters remaining. The Tempest is likely the next to go, needing only two more characters, followed by As You Like It with five characters.

While Anderson expects the project to end soon, you never can tell with monkeys, virtual or not.