The Spork Has a Mutant Sister Utensil: The Knork 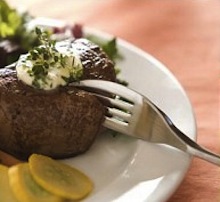 If you ever bought lunch at elementary or middle school instead of brought your own and found that you were eating your weird pink fluffy pudding substance with a spoon that, for some reason, had prongs at the end and was stabbing your tongue, well, there’s another mutant utensil on the block: The knork. Infinitely more sensical than a spoon-and-fork combination, the knork is, as you might’ve guessed, a combination of a knife-and-fork.

The knork comes in a classy stainless steel variety for your knork-based dinner parties, and a disposable variety for some quick-and-dirty knorking. Though seemingly much more logical than the spork, there still seem to be logistical problems with the knork. The first is that, if the edges are beveled enough to cut meat, wouldn’t eating off the knork be somewhat dangerous? An exciting exercise in how steady one can keep one’s mouth. Secondly, when cutting most things, you need a fork to steady the thing that is being cut, so wouldn’t one still need something to steady the food in order for the knork to saw back and forth? One could use another knork, I guess.

If you visit the knork’s website, knork.net (which is really fun to say aloud), you’ll see that you can order the knork in a variety of ways, from single and multi-knork packs, to regular silverware sets that include the knork. If you’re hesitant to become a knorker, you can take part in the sample program, in which you can purchase a knork salad fork for only five bucks, though a single knork is only seven bucks, so you might as well just go all in.