You Must Enter a Product Key to Install Windows 8, No More Trial | The Mary Sue

You Must Enter a Product Key to Install Windows 8, No More Keyless Trial Period 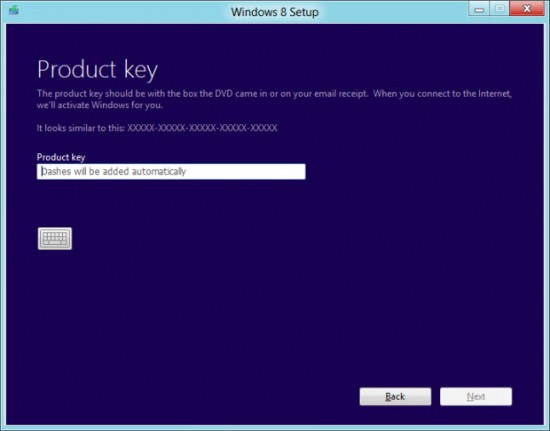 As we get closer to the Windows 8 official release on October 26, more odd tidbits about Microsoft’s new operating system are becoming known. First, we learned that Windows 8 will (at the time of the release, at least) not have an official way to boot straight to the traditional desktop to which we’ve all grown so accustomed, and will force users to the tablet-style user interface formerly known as Metro before they can access the desktop. Now, with the release of the RTM build, it seems that Windows 8 will require users to enter a product key during installation, essentially removing the 30-day trial period we’ve all come to know and love.

Now, a hefty amount of software works the same way — pretty much any video game without a demo, for example — and requires that users pay the full price before they actually get to try it. However, with something as embedded and far-reaching as an entire operating system — something that has its sticky hands in anything one does on a computer — a trial period was always appreciated. The removal of a legitimate trial period is almost devastating in Windows 8, considering this new iteration of Microsoft’s operating system sports a drastic overhaul with the artist-formerly-kn0wn-as-Metro interface. If you wanted to give Metro a shot, you’ll now have to pay to do so, or secure your “trial period” via other means. However, reports also state that users can use a Windows 8 product key that has already been used, but the operating system will be limited in what users can personalize after the activation fails, and users will be pestered by a constant reminder message to activate Windows 8. So, if you can secure a product key (seemingly even a used one), you can install Windows 8, but it won’t be a clean, personalized, happy experience.

Windows 8 is only a couple of months away, so we won’t have to wait much longer to begin waiting for some third-party to create a way for our new Windows 8 computers to boot straight to the desktop and bypass the new interface entirely.