Report: Microsoft to Stop Using the “Metro” Term to Describe the Metro UI 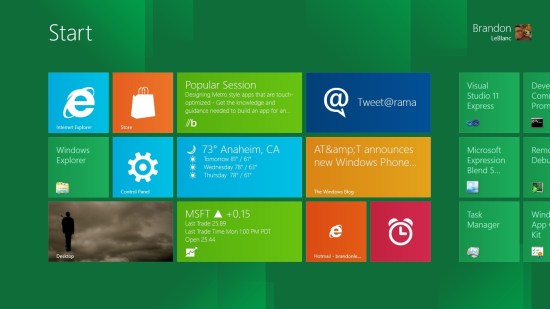 Even though Windows 8 finally has a release date — only two months away on October 26 — and even though its somewhat infamous UI design choice is almost universally known by the name Microsoft has referring to it, Metro, reports have been floating around the web that Microsoft is now backing away from the Metro terminology due to “discussions” with a European company over the name.

The Verge and ZDNet are reporting that Microsoft is currently trying to de-emphasize use of the Metro terminology to describe the boxier, flatter, typography-heavy user interface, even though that’s the term we’ve all come to know over time. ZDNet reached out to Microsoft for comment about why they’d be moving away from the Metro terminology, and received a slightly more informative answer than the kind one would expect involving key phrases like “we don’t” and “comment on rumors and speculation.”

“We have used  Metro style as a code name during the product development cycle across many of our product lines. As we get closer to launch and transition from industry dialog to a broad consumer dialog we will use our commercial names.”

If that answer is actually true, then this is just par for the course for tech developers; just about every video game console uses some kind of code name during development, then switches to something a little less odd upon final release. However, it does seem a little odd that Windows would let their terminology become so widespread if they knew ahead of time that they were going to rename it.

The Verge is reporting that they’ve seen an internal memo passed around Microsoft telling employees to refer to the Metro UI as “Windows 8 style UI.” They cite “discussions with an important European partner” as to why they’re suddenly taking a different path with the name. The report also says that Microsoft plans to have a replacement term ready to roll by the end of this week.

If Microsoft really is attempting to rename the Metro UI, it wouldn’t be a bad idea to name it something very bland and similar to what the reported internal memo suggests. Anyone new to the Linux game, for example, knows how confusing it can be when an operating system is named one thing and its graphical style is named something else, especially when each significant change to the graphical style receives a new name. If Microsoft really wants to avoid confusion and use the “broad consumer dialog” of which they spoke, renaming Metro to something with “Windows 8” in the name would probably do the trick.