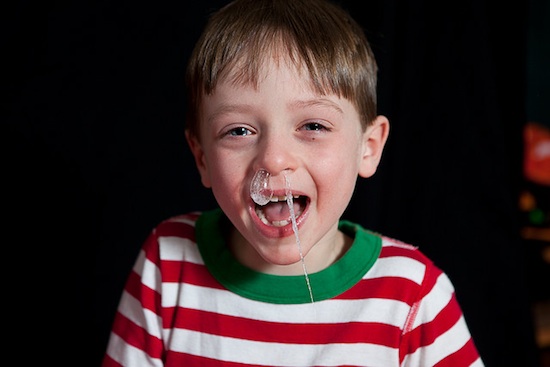 Of all the gross things that the human body can produce — and let’s face it folks, we can get pretty gnarly sometimes — mucus has to be near the top of the heap. As unpleasant as it may be, though, that gunk does serve an important purpose, trapping bacteria and viruses before they can further infect your body. Now, MIT researchers are exploring the possibility that mucus could have the same disease preventing properties outside of your body, preventing bacteria from forming fortresses called biofilms.

Their ability to form biofilms is one of the things that makes hospital superbugs so hard to kill. These bacterial colonies consist of layers upon layers of bacteria living on top of one another. Kill the top layer by wiping it down with a soapy towel or an antibacterial wipe and you haven’t really cleaned the surface, as the next layer steps up to take its place.

A study published in Current Biology, though, suggests that proteins that make up mucus could short circuit the ability of some bacteria to form biofilms. The slimy substance can capture bacteria and keep them from clustering together, taking away their strength in numbers and making bacteria a whole lot easier to eliminate in the future.

Though mucus is common in our bodies, coating pretty much every wet surface, we still understand fairly little about how the substance works to prevent infections. This latest study shows that mucus proteins can keep bacteria on the move in the body, not allowing them to adhere to a surface and set up shop. That prevents them from finding a home with other bacteria of their kind, which is where they can do the most damage to peoples’ health.

Using the arresting qualities of mucus could make a lot of sense for fighting infections in settings like hospitals by managing bacterial colonies rather than trying to wipe them off the face of the earth — or the sink handle, as the case may be. Since mucus simply disarms bacteria instead of killing them outright, it would be harder for fast-evolving superbugs to develop resistance to the technique, as they often do with antibiotics.