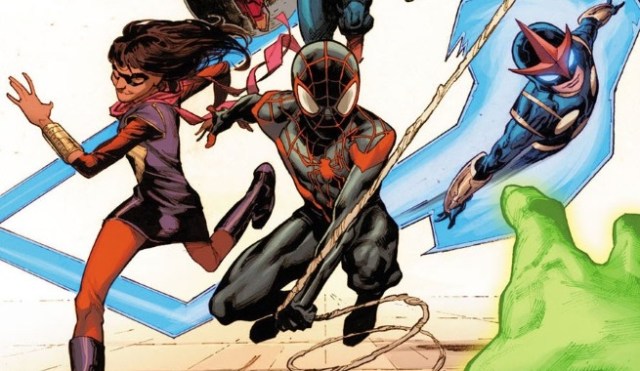 Marvel’s “All New, All Different” post-Secret Wars reality has a lot of exciting elements, not the least of which is Kamala Khan, AKA Ms. Marvel, joining the Avengers! But of course, nothing ever comes easy for superheroes, and Ms. Marvel’s next chapter comes with its share of trials and triumphs, according to editor Sana Amanat.

Amanat spoke to Marvel.com about what fans can expect for Kamala Khan’s future now that she’s “hit the big time.” Amanat’s excited about Ms. Marvel joining the new Avengers team along with Miles Morales, a big win for diversity in comics in general and for those characters specifically. She said,

In all honesty, it just goes to show that there’s great value in these characters and having them in the Avengers further proves their worth. I was so excited when Tom [Brevoort, the Avengers editor] showed me the first sketches of Ms. Marvel in the Avengers team—it really means that Kamala had earned her way to the top.

But though she’s definitely earned her spot, it just wouldn’t be good fiction if there weren’t still obstacles to overcome. Amanat continued,

As much as Kamala has a right to be there—it’s still a bit of a culture shock. Dreaming of being an Avenger and then suddenly being one is a lot to take on for someone of her age. So, she’ll be a little awestruck, a little overly ambitious. Sort of like how I was when I started working at Marvel for the first time!

Just like in the real world, her newfound fame will come with its own set of problems, too. “She’ll be dealing with the reality of her stardom backfiring on her, discovering that someone will be using her image for nefarious purposes.” Amanat had a few more hints on what we can expect for the hero’s future, and if it were possible for us to be even more excited about the new Avengers, looking ahead to what’s on the horizon for Ms. Marvel would do it.

Now we just have to wait and hope that this will all reflected in the MCU, too, as the first round of movie heroes makes way for the next…