Celebrate The 25th Anniversary of Mrs. Doubtfire | The Mary Sue

The 25th Anniversary of Mrs. Doubtfire Has Us Feeling Nostalgic and Very Old

The beloved film is a celebration of the unconventional family. 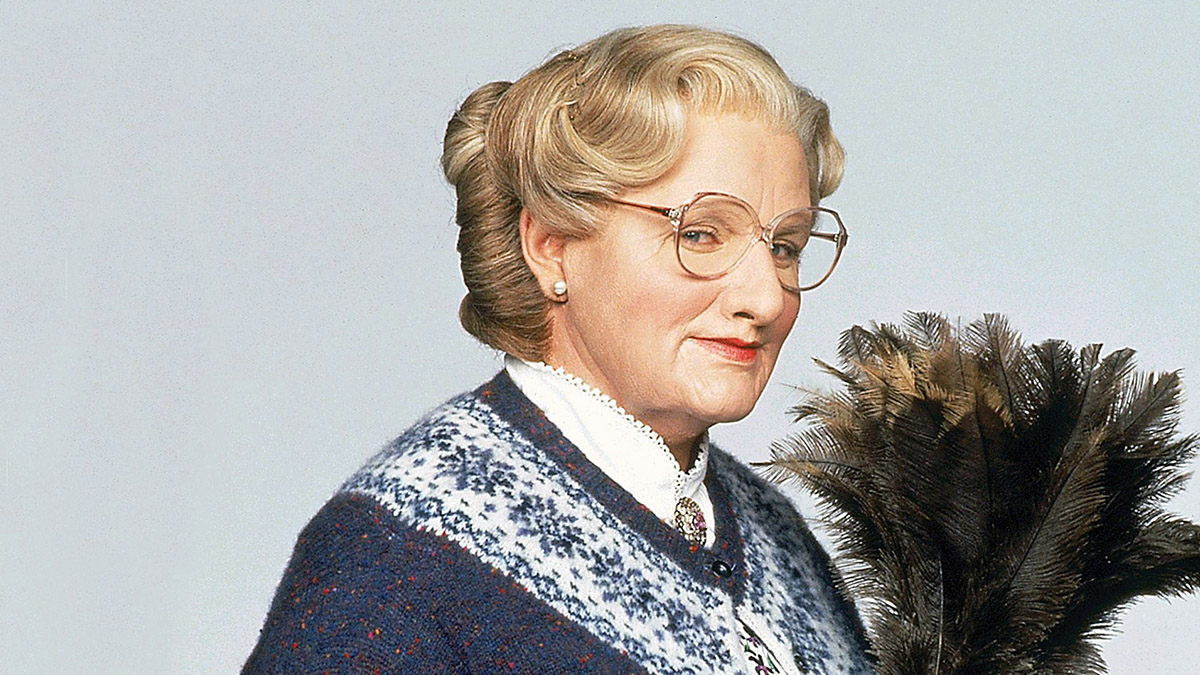 It’s been 25 years since audiences were first introduced to Mrs. Euphegenia Doubtfire, the world’s second favorite British nanny, lovingly played by Robin Williams. When it was released in 1993, Mrs. Doubtfire was a smash hit with kids and adults alike, and quickly became a family favorite film. The comedy has endured thanks to an inspired performance by Robin Williams as Daniel Hillard, a divorced dad who assumes the guise of a British nanny in order to spend more time with his children.

In honor of the film’s anniversary, Variety interviewed the cast and crew of the film, who shared warm memories of being on set and working with Robin Williams. Mara Wilson, who played Natalie, said of working with Williams, “He never talked down to us. He would get down to our level, literally, looked us in the eye and talk to us very gently. He was warm and friendly and fun and ridiculous the whole time. But you could tell he really understood and loved kids.”

Williams owns the film with his trademark zaniness and fast-flying humor, but it’s his warmth and genuine devotion to his children that makes the film so moving and genuine. That warmth and charisma paired with his brilliant humor made Robin Williams not just famous, but a beloved staple of kids and family films. Williams was so compelling to watch because he had the unbridled enthusiasm and energy of an overgrown kid. A generation of kids grew up with Williams as an entertainment staple, and his passing in 2014 felt like losing a beloved member of the family.

So this happened. #mrsdoubtfire #reunion #25yearslater

Lisa Jakub, who played older sister Lydia, said of Williams, “Robin was very open with me about his issues with addiction, his issues with depression and mental wellness. That was incredibly important to me. I had told him about my issues with anxiety. The fact that was so willing to be honest with me had a huge impact on me as a 14-year-old. I’m an advocate for mental health awareness. Part of that stems from that fact that I learned from Robin that’s it’s okay to talk about these things.”

The film also gave us one of the first openly gay characters in a family film with Harvey Fierstein’s Uncle Frank, the make-up artist brother of Daniel who helps him create his Mrs. Doubtfire disguise. It’s a small but important role in the film, and Fierstein plays perfectly off of Williams. It’s rare enough to see an openly gay character in a studio film in 2018, let alone in a kids film. Frank is not only a positive role model in the movie, but he also acts as the queer voice of reason, which is necessary in a film that hinges on a man in drag.

Mrs. Doubtfire was also a vitally important film for children of divorce, who rarely saw themselves and their families reflected in popular culture. The film didn’t villainize either parent, and took a thoughtful approach to explaining and normalizing divorce to an entire generation of kids. Mrs. Doubtfire is hilarious to be sure, but what makes it an enduring classic is its heart and its message that no matter what changes, family will always be there for you.

What are some of your favorite Mrs. Doubtfire moments? Let us know in the comments, and watch out for those drive-by fruitings!