For Mozart’s 265th Birthday, Let’s Recall the Perfection of Amadeus 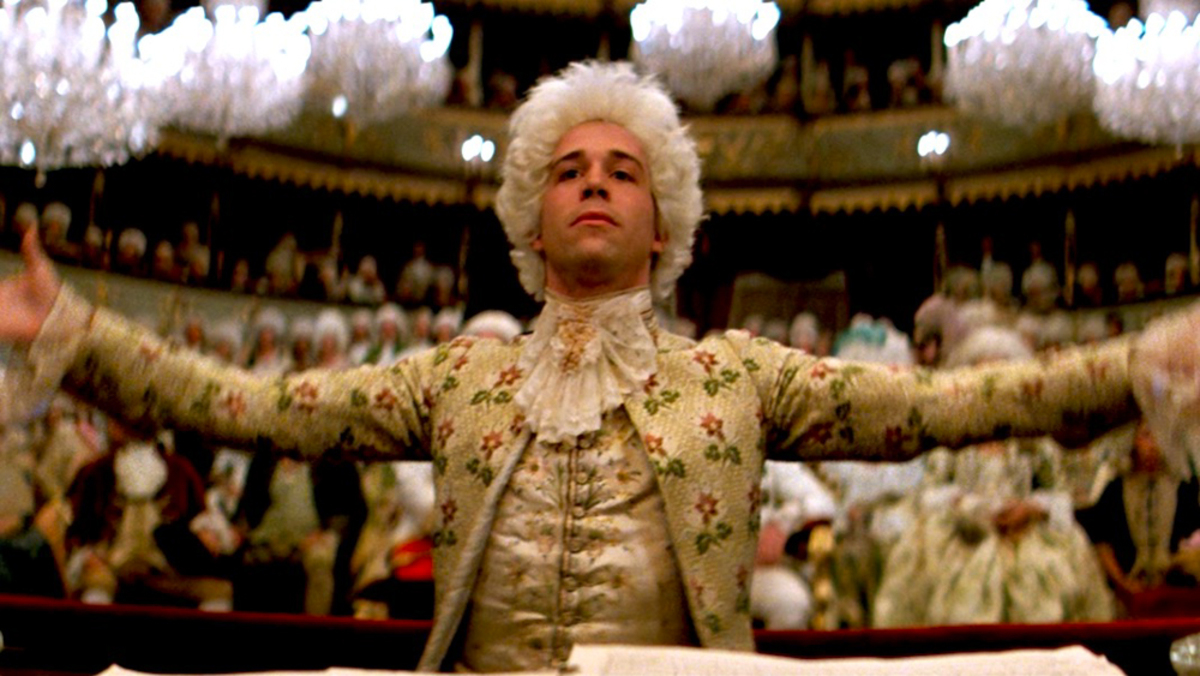 Today is Mozart’s 265th Birthday. Mozart is a towering figure in music and art, but he’s also one of the most fascinating geniuses in Western history. It’s so common for us to see a historical figure and imagine them to be just as dignified and well-mannered as a porcelain bust or portrait in oil, which is why Amadeus, the play, and even more so the 1984 film adaptation directed by Miloš Forman, is so brilliant. It’s a work that shows a legendary artist as incredibly human while also touching on how music can let us hear, well, the voice of God (however you define that).

I’ll be upfront with you here. I’m doubly biased when it comes to this film. It’s one of my favorites movies of all time and it’s about my favorite composer. I saw Amadeus before I started studying opera, and it was the work (along with a certain Phantom) that made me truly fall in love with opera and classical music. And subsequently, as I studied music and music history, it only made me love Amadeus more. It’s not a terribly controversial take to say that this film is magnificent, given that it won eight Oscars, including Best Picture.

Amadeus is so many things. It’s funny, thanks in great part to F. Murray Abraham’s brilliant glowering as Salieri. It’s beautifully produced and moving. And it brilliantly uses Mozart’s (and Salieri’s) music throughout with such drama and deftness, that it makes you love these compositions so much more. The music is a character and I love that.

The genius of Amadeus is that Mozart is not our point of view character. He is the subject because he is the object of Antonio Salieri’s jealousy and obsession. Because we see this glittering world through the eyes of Salieri we’re able to truly appreciate Mozart’s genius as an audience. But we also see how human, crude, boorish, and annoying Mozart was.

Mozart was probably not the victim of any sort of murder, as the film implies, but he very much was as perverse and manic as we see in Tom Hulce’s incredible performance. Just read letters between Mozart and his family members or lovers, where he will deftly switch between five languages while talking about his penis and ending with the affectionate goodbye “I shit in your bed!” The Mozart of Amadeus who we see making fart jokes and seducing women is very much the man he was. And at the same time, he created some of the most beautiful music ever heard.

Amadeus is brilliant because it allows the music to take center stage, and because we have Salieri speaking to us and experiencing it with us, it’s even more meaningful. We get to take a trip through some of Mozart’s greatest hits with an expert guide, and that alone makes this music more accessible and enticing for those who are intimidated by classical compositions. And for those of us that love this music already or fell in love with it through this film, it reminds us of how words can speak to our mind, but music can speak you our souls.

The pinnacle of Amadeus for me is the scene when Salieri, sick with jealousy and overcome by awe, watches the finale of The Marriage of Figaro. Not only is this my favorite opera in the world (and one of the only operas where no one dies!), the moment immortalized in this scene is truly perfection, and through Peter Shaffer’s words, Forman’s direction, and Abraham’s performance, it touches something transcendent and divine.

The title “Amadeus” is Mozart’s middle name, yes, but it’s meaning is more than that. Amadeus translates to “beloved of God,” and it is Salieri’s hatred for another man being, in his eyes, God’s beloved above him that suffuses the film with both humor and tragedy. Salieri is the only one, in his view, who is able to see that Mozart is God’s instrument, and instead of feeling awe at that beauty … he feels jealousy that it’s not him. That sort of struggle as an artist is real, but it’s also often other artists who can appreciate transcendent accomplishments the most.

Of course, as a music nerd, I have to put in a caveat that Amadeus is not a perfect or entirely accurate portrayal of Mozart’s life. The final act entirely ignores two of his great late opera, Cose Fan Tutte and La Clemenza Di Tito. Cosi is an especially egregious omission because it’s an incredibly fun and funny opera. Other characters are altered and people like Mozart’s extremely brilliant sister, Maria (called Nannerl) are glossed over. But that’s what movies do. This isn’t a history book, it’s a film that explores the true spirit of an artist, and does it brilliantly.

For me, as a lover of film and music, Amadeus remains one of my favorite movies because it’s a fantastic ouroboros of art about art that dissects and elevates masterful and talent while itself being masterful. It is so hard to make a biography of a legendary figure without falling into tired tropes of love stories and inspiration, but Amadeus strikes the perfect balance between realism and satire, human and divine.

So, if you want to celebrate Mozart’s 265th year (when you’re done listening to a lost composition which will be played for the first time in centuries today), watch Amadeus and take a moment to appreciate that centuries later, the music of a strange, brilliant, dirty little man can still bring us a bit closer to the divine.