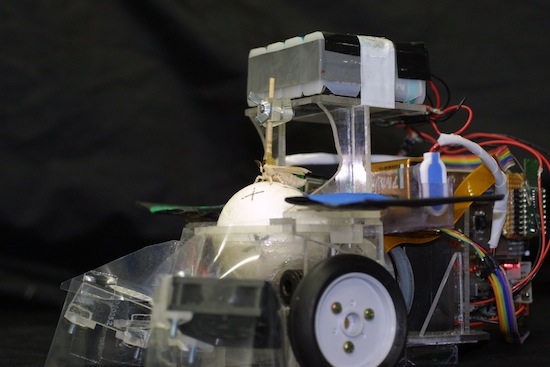 One of the toughest hurdles to clear for the next generation of robotics is trying to teach robots the senses that we use everyday, or at least develop accurate analogs for them. Researchers at the University of Tokyo are tackling the problem of teaching robots to smell with a little help from the humble silk moth. They’ve put a male moth in the driver’s seat of a small, two-wheeled robot, letting the moth’s powerful attraction to the scent of  female silk moth pheromones help it guide the robot across a chamber. As the moth drives, the robot takes lessons from it in tracking down and following scent trails, and also in moth courtship, a skill that will probably come in less handy. Keep reading to see the world’s smallest mech pilot it in action below.

The moth is attached to a free-moving foam ball that acts like the ball in a mouse, moving under the moth’s own movements and maneuvering the robot in kind. As the moth progresses toward the smell of a female being piped into the test chamber, those movement commands are recorded by the robots onboard sensors. The team reported their results today in the journal Bioinspiration and Biomimetics, and you can see in action right here.

The result is a sort of simple virtual moth brain that can later be used to guide the robot toward pheromones without the moth’s presence, and more importantly can teach researchers about the neural mechanisms of smell, and how they can more easily translate those to robotic commands. Of course, moth pheromones are just the first step towards teaching the robot to recognize and track other smells — odors associated with dangerous chemical leaks, for example.

And yes, this is also a perfect recipe for a confused, lonely robot who doesn’t understand why the other moths don’t love it back. That’s a shame, but science does not move forward without tragic robots.

(via Institute of Physics, image courtesy of University of Tokyo)