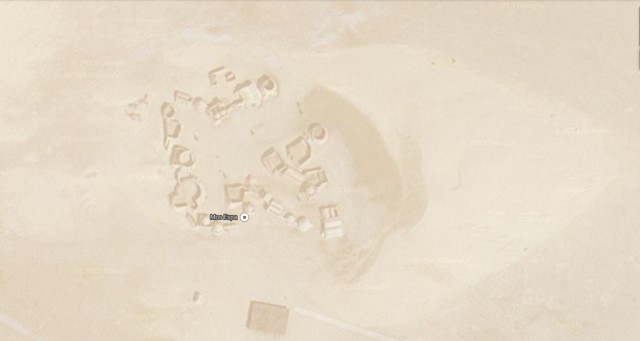 It turns out that Anakin Skywalker had a good reason for not liking sand. Aside from the fact that it’s rough, and coarse, and gets everywhere, it’s about to swallow up his childhood home of Mos Espa. The desert planet of Tatooine, as well as its real-world counterpart Tunisia, is host to slow-moving crescent-shaped dunes called barchans, and one is heading straight for the Phantom Menace set that has been left dormant as a tourist attraction. If only nature could wipe away my memories of podracing and Jar-Jar Binks, too, then this wouldn’t be so depressing.

Ralph Lorenz of Johns Hopkins University’s Applied Physics Laboratory, who has previously studied the geology of Saturn’s moon Titan, turned his attention to the desert of southwest Tunisia near the town of Tozeur, where the Star Wars: Episode One set has remained for over a decade. Though he said he is “no more than an idle fan of the movies,” he decided to examine the dunes using the site of Mos Espa as a reference point, and has published a paper in the journal Geomorphology on the dune’s movement (an unformatted version is viewable by non-subscribers). He found that a barchan dune that was estimated to be 6.5 meters (21.3 feet) high was encroaching on the film set’s buildings and prop moisture vaporators. From satellite images, it appears as if a giant Pac-Man made of sand is about to gobble up the town. 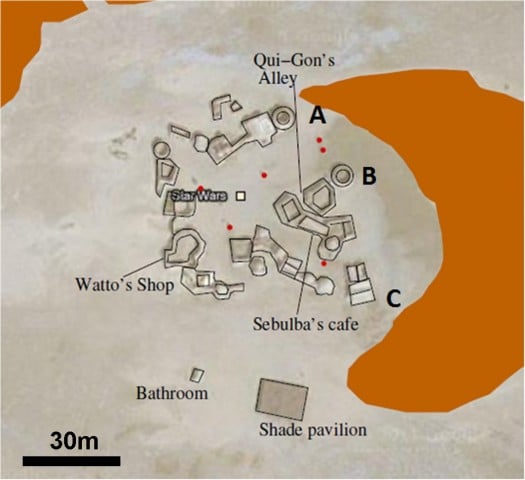 The barchan is moving at 15 meters per year, which is pretty fast for a gigantic mound of sand slowly shifting due to wind conditions. It’s currently within sight of Mos Espa, with its edges touching some of the buildings, but its exact rate of movement can change based on rainfall and other unpredictable factors. Lorenz told us via email that the set has perhaps six years before it’s covered, but the local authorities are considering bulldozing the dune to protect the tourist site’s value. Even if something is done to stop the dune and preserve this piece of Star Wars history, another larger dune is 500 meters (1,640 feet) to the east, and at its current rate of movement, it will submerge the set entirely in 80 years.

Lorenz also found that one of the desert sets from A New Hope has been gone for at least a decade. Sooner or later, Mos Espa will follow. On the bright side, if you enjoy seeing a physical representation of the prequels being covered up and erased, then you can spend the next few years watching the dune’s slow progression on Google Earth.

(The Planetary Society via The Independent, Uproxx, main image via Google Maps)