A new structure in California was destroyed by vandals. 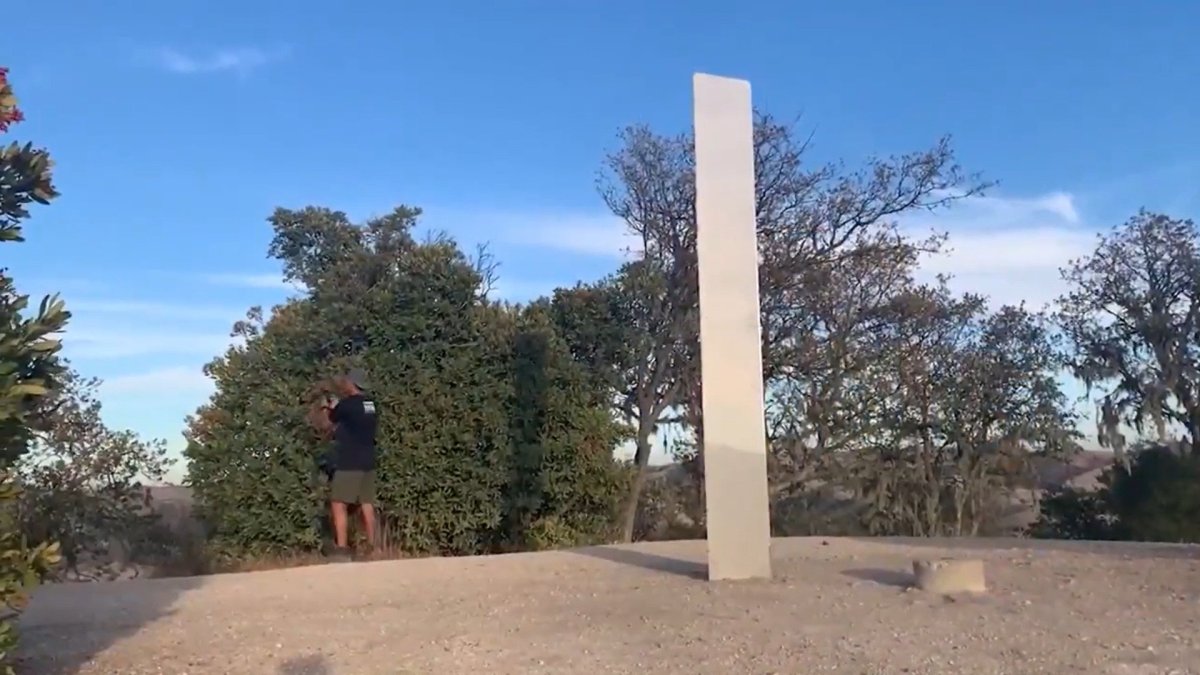 First, a mysterious metal monolith appeared in the Utah desert. Then, it disappeared (we’ll get to how in a bit). And then another popped up in Romania. And now, a third one showed up near a hiking trail in California! But it was torn down by racist fanatic Christians because, well, that’s still the world we’re stuck with in 2020. There’s nothing that the racists can’t ruin.

Let’s back up a bit. The California monolith showed up yesterday, and unlike the others, was in a pretty accessible location, which means: lots of attention and pictures getting taken for people who apparently have no fear of being sucked into a wormhole or whatever.

Got up close and personal with the mystery California #monolith today. Anyone else been out to see it? pic.twitter.com/8pOimhQiyY

There is currently a monolith at the top of Pine Mountain in Atascadero!!

But of course, people are terrible. So last night, a bunch of neanderthals shouting “Christ is King!” decided to tear down what they, I guess, assumed was a Satanic monument or something? Please, no one tell them about Stonehenge. These jerks posted their vandalism in a live-streamed video to the blockchain streaming site DLive. (And no, I don’t technically know what a blockchain streaming site is, and I don’t want to find out).

Of course, they were also shouting “America First”-type slogans and wearing MAGA hats.  They toppled the 200-pound statue all the while spewing racism and put up a cross in its place before dragging the monolith down the mountain. Honestly, I can’t blame the aliens if they change their mind and decide not to establish contact now. Or if this is the reason they blow up the planet. Either is fair.

So, we know where one monolith went, sadly. And answers may have emerged as to where the one in Utah went, if a recent Instagram post can be believed.

According to this write up, at 8:40 on the day the original monolith disappeared:

“4 guys rounded the corner and 2 of them walked forward. They gave a couple of pushes on the monolith and one of them said “You better have got your pictures.” He then gave it a big push, and it went over, leaning to one side. He yelled back to his other friends that they didn’t need the tools. The other guy with him at the monolith then said “this is why you don’t leave trash in the desert.” Then all four of them came up and pushed it almost to the ground on one side, before they decided push it back the other when it then popped out and landed on the ground with a loud bang. They quickly broke it apart and as they were carrying to the wheelbarrow that they had brought one of them looked back at us all and said “Leave no trace.” That was at 8:48.”

So, these monoliths seem easy enough to break or take, so does that mean they are manmade? That would be a bit disappointing but it still doesn’t solve the mystery of why they’ve shown up or what purpose they were created for. Art? Brand promotion? We only know that if the jerks that tore down the one in California turn into glowing purple goop, they won’t have anyone to blame but themselves.