It's probably aliens. No one cares at this point. 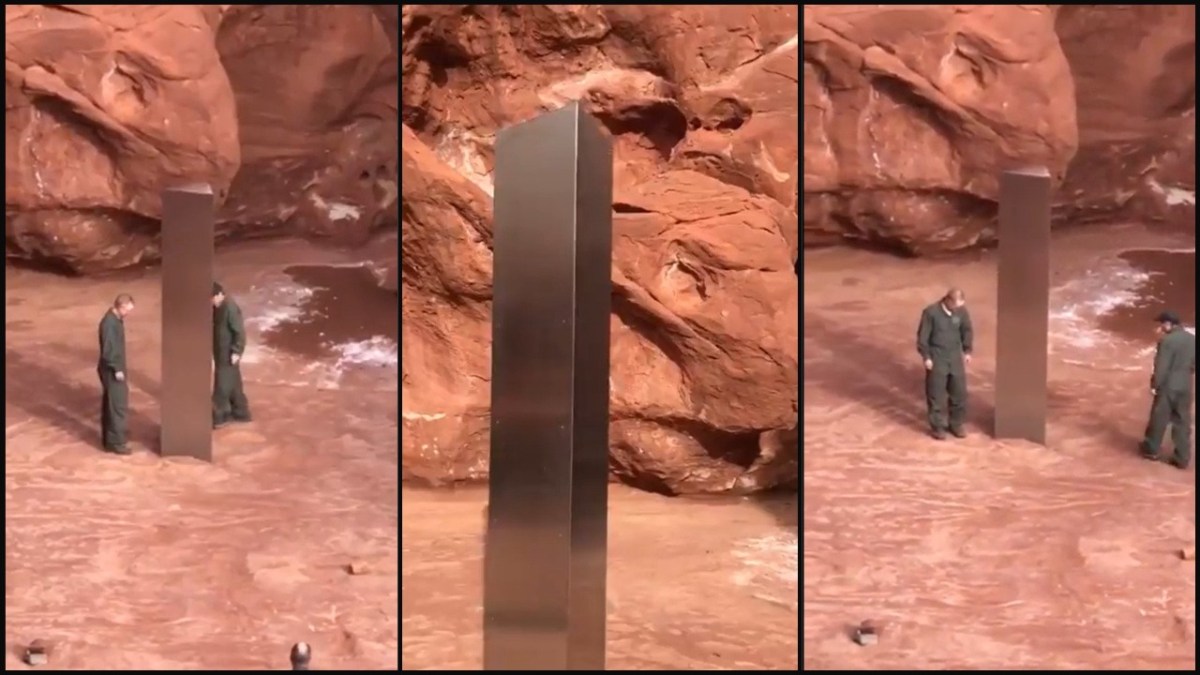 Last Wednesday, a Utah Department of Public Safety helicopter was assisting members of the Utah Division of Wildlife Resources with some bighorn sheep and spotted something … mysterious. Not a stray sheep. A 10-foot (or so) tall metal obelisk just sitting there in the middle of the dessert. No explanation. Just … something out of a sci-fi movie.

The crew explored the site and shared the footage with local news and had quite a lot of fun with it. And luckily no one was zapped to another dimension! Or I guess that’s unlucky considering everything.

The DPS and DWR crew had about as much of an idea of what they were looking at as we do from these videos, meaning none. “I’d say it’s probably between 10 and 12 feet high,” pilot Bret Hutchings told KSL news. “We were kind of joking around that if one of us suddenly disappears, then the rest of us make a run for it.”

What did they turn up when they investigated? Nothing that told them at all what this was. It was certainly not made by nature, so could it be … aliens? Travelers from the future? Secret government installation?

“We were, like, thinking is this something NASA stuck up there or something. Are they bouncing satellites off it or something?” Hutchings said. The crew wasn’t sure and they lean towards a slightly more mundane explanation: “I’m assuming it’s some new wave artist or something or, you know, somebody that was a big Space Odyssey fan.”

But that still raises the question of why? And how? The authorities are not telling anyone where this thing was found because it’s a very remote location and if people go looking for it they could get hurt and stranded. Remember, they had to get to it by helicopter. And yet, someone put it there.

The reaction from the internet since this has been discovered has been typical 2020. We’re all … unfazed. Aliens or another dimension just sent a mysterious metal object into the desert in Utah? Cool, put it right next to the mysterious green slime in Toronto and murder hornets.

The really strange thing about that Utah monolith story is that it was discovered while they were counting sheep from a helicopter.

Aren’t they worried about falling asleep and dropping out of the sky doing that???

2020 ending by going full Kubrick on us. Utah Wildlife Resources discovered a monolith in the desert. Time to blast György Ligeti’s “Requiem for Soprano…” https://t.co/oMyjy3BPhU

“That’s been about the strangest thing that I’ve come across out there in all my years of flying.” pic.twitter.com/u9uD2KUGvb

At this point start messing with it let’s see what the limit on 2020 is, red line this shit https://t.co/6mJCBQEe0Y

Alright, who had “alien monolith in the Utah desert” on their 2020 bingo card? https://t.co/9kyC8lY6gO

We could just leave the Utah monolith alone and mind our business.

And not summon an alien or demon or whatever during the one of the worst years in our lifetimes. https://t.co/vEecYsxjR0

I agree we should leave well enough alone and not activate the doomsday clock or whatever this is … but when has humanity at any point in 2020 done the right thing?

Take me away, little green ones!