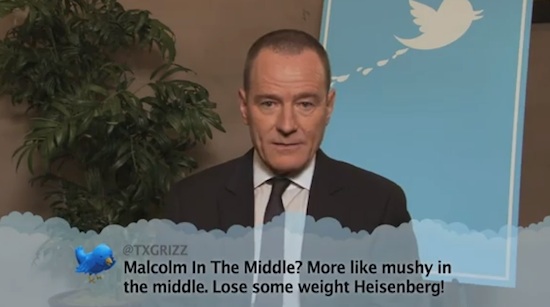 If there’s one thing we like more than saying mean things about people more successful than us — and we’re not saying there is, because that is, like, a top five pastime around these parts — it’s watching celebrities debase themselves by reading mean things that other people have said about them on Twitter. Of course, it’s not really celebrities debasing themselves, because the joke is really “Look how impotent the best attack you can muster on this person is! It is a joke that they will repeat themselves on national television, because who cares what you think @some_asshole_on_twitter?” Still and all, we do get a kick out of watching folks like Modern Family‘s Eric Stonestreet and Breaking Bad‘s Bryan Cranston reading people’s ill-conceived Internet slams on them in entertaining and only occasionally threatening fashion.

Seriously, y’all — if we ever get tired of hearing Dr. Phil read the line “Doctor Phil, why don’t you shut the fuck up you bald-headed, big-mouthed hillbilly,” just take us out behind the barn like Old Yeller, because it’s a sure sign the light has finally gone out in our hearts and our spirits will never again know the touch of joy.