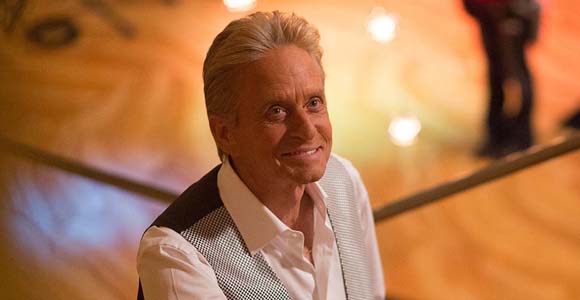 We admit, we were taken back when Marvel Entertainment announced Michael Douglas was joining the cast of Edgar Wright’s Ant-Man film as Ant-Man Hank Pym. But our next thought was, what about The Wasp?? Well, we’ve got some new rumory information on that front plus the possible addition of another actor and Douglas explaining why he took on the role.

The actor spoke with Reuters after the Golden Globes, where he won for his performance of Liberace in HBO’s Behind the Candelabra.

“I’ve been dying to do a Marvel picture for so long. The script is really fun, the director is really good. Dylan (the actor’s 13-year-old son) will love it. He’ll have a picture he can see,” he told them. “Sometimes – like (when) they didn’t see you for Liberace – you’ve got to shake them up a little bit and have some fun.”

Fair enough. Meanwhile, The Wrap is saying Michael Peña has been offered an unspecified role alongside Douglas and Paul Rudd’s Scott Lang. They also wrote, “Marvel denied that Pena was in negotiations,” so take that how you will.

The last bit of rumor pertains to the film’s female lead. Variety is saying one exists but won’t say if it will be a comic book character. “Rashida Jones and Bryce Dallas Howard have been mentioned but, as of now, no one has been offered the part,” they write. While Howard has already played a Marvel character in Spider-Man 3 (and has Jurassic World on her plate), Jones was previously name-dropped for Janet Van Dyne, the non-superhero name for The Wasp, back in October of last year. We’re crossing all the fingers.