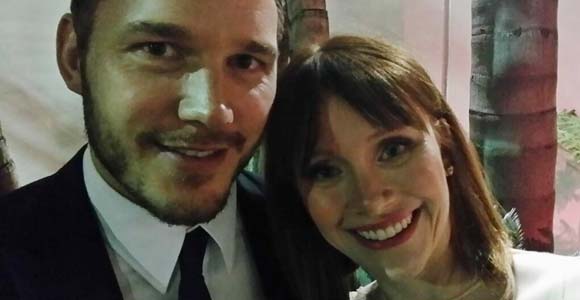 Find out more, plus hear what original Jurassic Park star Sam Neill had to say about his involvement in the upcoming film.

Guardians of the Galaxy star, Chris Pratt had been pegged to play a “rugged ex-military” character for Jurassic World back in November. Thanks to a tweet from director Ron Howard (not the director of Jurassic World, mind you), Pratt is set to co-star with his daughter Bryce Dallas Howard.

Bryce and Chris meet for the 1st time on red carpet they will be co-stars in next Juraissic pic.twitter.com/Pu1nUI9SNG

While there’s no official word from the studio, I’d say it’s a done deal.

The last we heard on the Colin Trevorrow-directed film was that it was absolutely a sequel and not a reboot. Many were thinking that left the door open for previous actors from the franchise to show up. But signs aren’t looking good for Dr. Grant.

“Look, you never say no. I think there’s a whole new cast and a whole new look at things, and I think that’s great,” Neill told The Examiner. “As I said, I’d never say no, but I wish them… well, I’m sure it’s going to be great, but they don’t need me.”

That makes us sad but in the same interview he expressed an interest in working on J.J. Abrams Star Wars. I could get behind that.